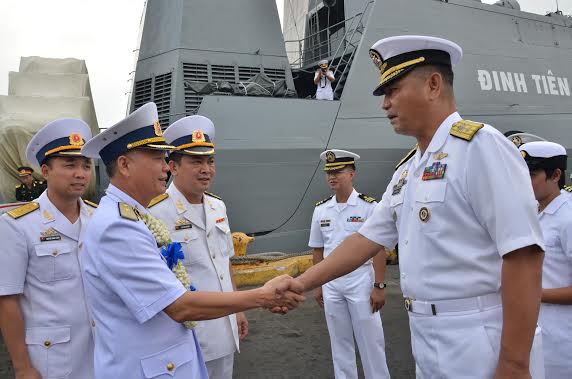 MANILA, Philippines – Two Vietnamese warships arrived in the Manila for a goodwill visit until Wednesday amid tensions in the West Philippine Sea (South China Sea).

The ships arrived Monday at South Harbor in Manila.

Kiem and the commanding officers of both ships visited the Headquarters of the Philippine Navy and rendered an office call to the Navy Vice Commander Read Admiral Caesar Taccad.

It was the first time that Vietnamese ships made a port call in the Philippines, Domingo noted.

Both countries have claims over the West Philippine Sea and diplomatic row with China.

Domingo could not say, however, if the West Philippine Sea was discussed by the top Navy officials.

The port call includes activities such as goodwill games, ship tour and receptions “to promote camaraderie and friendship” between the two countries.

On Tuesday, the Department of Foreign Affairs confirmed an ongoing reclamation by the Chinese in Fiery Cross Reef (Kagitingan Reef), a territory that is also claimed by the Philippines. This move is supposedly part of China’s efforts to assert its claims in the disputed seas.

Last March, the Philippine Navy hosted the first staff-to-staff talk with Vietnamese Navy in a bid to further strengthen the relation and increase the degree of cooperation and interoperability of both navies.