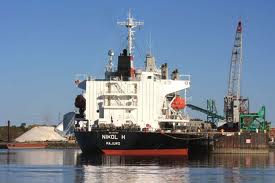 DALY CITY, California — A cargo ship stuck in the Delaware River in Philadelphia with Filipino crewmembers since April due to legal and financial problems has a new owner and can sail in a week.

The former Nikol H has a new name, Nicolina, as well as a new crew of 20 Filipinos and new owners.

Nicolina, registered in the Philippines, has been retrofitted with new parts. A federal lawsuit that had kept the vessel here has been settled, reported the Philadelphia Inquirer.

The original crewmembers could not leave the ship over the summer because their visas had expired. As their contracts expired, they received U.S. Customs “paroles” to go home. The rest left when the new owners took over. The new crew is able to leave the ship.

The US Coast Guard will verify the repairs, and the ship would be able to sail out afterwards.

The saga began April 12, when the Nikol H, owned by an operating company in Piraeus, Greece, discharged 13,521 tons of cocoa beans at Pier 84 in South Philadelphia. The Coast Guard cited the ship for operational deficiencies and ordered it not to sail until repairs were made, according to the Philadelphia Inquirer.

In May, Pier 84 operator Dependable Distribution Services sued in federal court for the ship owner’s failure to pay nearly $300,000 in wharfage, stevedoring and other fees for the six weeks it had been docked for repairs. Other suppliers, the ship agent, and a time-charter firm joined the lawsuit.

The owner and operator at that time, Derna Carriers S.A., claimed not to have the money to pay. Last month, all the claims were settled. Orient Shipping’s shipping remaining claim was settled after it bought the ship.