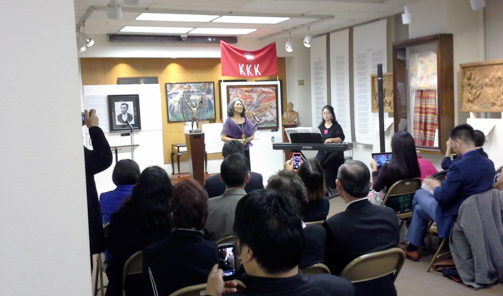 A student soprano in the audience, who sang the same piece elsewhere but is not of Filipino ancestry, acknowledged the depth of sentiment she still has to reach, which Mandac claimed with much ease and feeling.

Mandac delivered nationalist composer Lucio San Pedro’s song, Sa Ugoy ng Duyan (To the Rocking of the Cradle)–about a child’s longing for a mother–with such poignancy that it was easy to conflate the sentiment towards motherhood with that towards the motherland.

To live an honorable life (kagalang-galang) and perform good deeds (kawang gawa) was Andres Bonifacio’s message to the fledging Katipunan secret society he and other compatriots founded in 1892 to support, protect and promote the idea of freedom from Spanish colonial rule in the Philippines.

For this occasion, the museum displayed a Bonifacio panel featuring his (only) known official portrait, a small version of his iconic, defiant pose to signal the uprising in Pugad Lawin, and the emblems of the Katipunan—“the loftiest and honorable association of the children of the motherland (Kataas-taasang Kagalang-galangang Katipunan ng Mga Anak ng Bayan).” 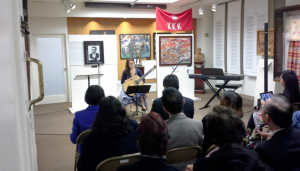 On the walls of the museum are wood bass reliefs of the history of the Philippines that visually converge at the center on the portrait of Rizal and his martyrdom at Bagumbayan (Luneta) in front of a Spanish firing squad. The museum reminds Filipinos there is no shortage of heroism and, on this particular evening, no shortage of artistry in song, music and poetry.

Ascalon reminded the audience about Bonifacio’s role in the development of the modern Philippine Republic. The Katipunan revolt sparked the inevitable emergence of a new nation, the first to free itself from colonial rule in Asia, and the first to establish a republic.

Museum Director of Operations Lydia S. de la Cruz explained the various pieces on the walls and in display cases, urging the audience to use the museum as resource for the San Francisco community to discover the rich history of the Philippines.

Dr. Michael Gonzalez, professor of Philippine history and anthropology at City College of San Francisco Philippine Studies department, took a not so typical evaluation of Bonifacio’s notion of nationalism.

The typical view, propagated in the Philippine public schools and media, is of Bonifacio as a firebrand, a passionate and a quick-tempered revolutionist. Often he is contrasted against Jose Rizal who is more temperate, reflective and reformist.

Gonzalez argued the contrary. Indeed, he said, the times called for passion. That much is expressed in Bonifacio’s poetry, an impassioned exhortation to Filipinos to recognize their oppression.

Fittingly, he said, Bonifacio’s rhetoric focused on the image of motherhood–the Inang Bayan (Motherland). Perhaps, this imagery and sense of longing for the mother comes from Bonifacio’s loss of first his parents, then of his first wife, both from illnesses.

A close reading of documents of the Katipunan as a secret society, Gonzalez explained, shows that its mission was to educate its membership with these noble post-colonial values, which would liberate Filipinos from the moral ambiguities that colonialism had impressed upon the native society, leaving them confused and aimless (walang katuwiran).

Ironically, Bonifacio’s demise and violent death in the hands of a rival faction led by Emilio Aguinaldo, presaged what Bonifacio thought must first be corrected for a new nation to begin, Gonzalez suggested,

Ina (mother), Inang Bayan, the Motherland, Prof. were the themes of the ensuing performances.

Theresa Calpotura, a well-known San Francisco classical guitarist, played an instrumental version of the “Noble Hymn of the Tagalogs” (the hymn Bonifacio hoped to be the national anthem) composed by his fellow Katipunero Julio Nakpil, who later would marry Bonifacio’s widow.

Calpotura’s next piece, composed by the late Bayani de Leon, expressed longing for a mother who has been away far too long in a foreign land.