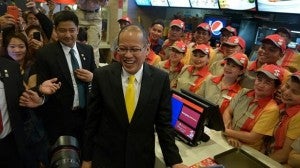 President Aquino was received like a rock star by a small gathering of Filipinos, who cheered and clamored to take photos of him as he dined at the Orchard Road shopping mall outlet. ANN/Singapore Straits Times/KUA CHEE SIONG

SINGAPORE—For a while, it seemed like he was at home.

President Aquino had burger and fries with his delegation at the branch of Philippine fast-food giant Jollibee on the sixth floor of Lucky Plaza shopping mall here on Wednesday, arriving to cheers from knots of Filipinos eager to see their leader.

Aquino wrapped up his two-day visit to Singapore in the company of some of the 180,000 Filipinos who work in the island city-state.

“I was nervous before he came. I felt cold as he was about to come up, and then I was OK,” said Katherine Riva Ramirez, the Jollibee crew member who took the President’s order.

Aquino had a cheeseburger meal with a soda, she said.

“Of course, I am happy about the arrival of the President,” said Janet Garcia, also among those manning the counters when Aquino arrived.

Bringing along some members of his delegation, President Aquino arrived for lunch after 2 p.m., with some 300 customers packing the store.

Families and groups of friends having lunch stood on their seats to catch a glimpse and take photos of Aquino and his group, who ate their meals in a reserved area of the store.

Many of the customers did not know that VIPs were coming, and were only too glad to find that they came just as the President of the Philippines was coming to the restaurant.

“Actually, we were already here when we learned he was coming. So we stayed and waited for one and a half hours. Of course, we’re excited to see our President,” said housewife Lilibeth Bautista, whose family has been living in Singapore for seven years now.

For 30-year Singapore resident Zeny Leong, the visit was another opportunity to take a selfie with President Aquino.

She had an opportunity to be in a group photo with the President during his state visit here in 2011. This time, she managed to get Aquino in the frame all her own.

“Of course, I felt excited, wonderful, great, because I got to stand beside him. I said ‘Sir! Picture!’ I got blurred photos two times until we got one [right],” said Leong, a salon owner at Lucky Plaza, widely known as “The Filipino mall.”

The Jollibee branch, one of two in the city-state, opened in March 2013 to an excited queue of 35,000 customers, said John Nacional, Jollibee Singapore area manager.

“Of course, we are honored that President Aquino and his delegation have decided to drop by Jollibee Lucky Plaza to see us and together with our chair, Mr. Tony Tan Caktiong; we are looking forward to welcome him and have a quick store tour maybe and for the President to meet the hardworking Philippine members of Jollibee Singapore,” said Nacional in a statement sent ahead of the President’s visit.

Jollibee Singapore’s employees were hired in the city in compliance with the local hiring policy.

Aquino made an example of Jollibee in his keynote interview with The Economist at The World in 2015 forum on Tuesday night.

“Jollibee started out as an ice-cream parlor and it’s now one of our biggest multinationals … I don’t remember exactly how many (branches in other) countries they have. So there are more and more opportunities that are coming up for very different, a lot of sectors,” Aquino said.

After about half an hour, the President and his delegation left for the airport to take a flight back to Manila.

Aquino drops by Jollibee at Lucky Plaza during Singapore visit

Business meetings, Jollibee visit up for Aquino Wednesday in Singapore