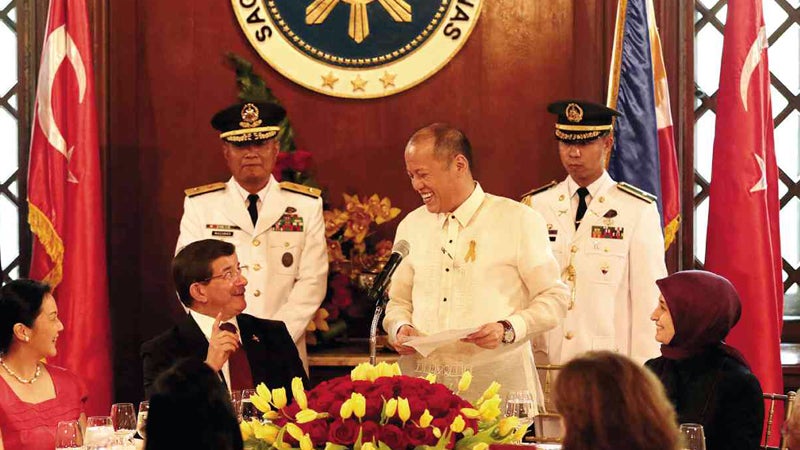 “Just as your people have partnered with us in advancing a just and lasting peace in Mindanao, allow me to say that it is my nation’s hope that we will be able to help Turkey as it confronts the persisting and emerging challenges of our time, such as the threat of [IS],” Aquino said in a joint press conference with Davutoglu, the first Turkish prime minister to visit the Philippines.

“Rest assured, you will find a partner in the Filipino,” the President said.

Aquino earlier played down the likelihood that IS was recruiting fighters from the Philippines, suggesting that local terrorist groups were merely riding on the popularity of IS in the jihadist community.

Davutoglu and his delegation arrived at Villamor Air Base in Pasay City on a private aircraft at 12:40 a.m. Monday. It was his third time in the Philippines but was his first as prime minister.

Davutoglu apprised President Aquino of his country’s own problem with IS terrorists, whose atrocities have forced around half a million Syrian refugees into Turkey in the last four months.

During a luncheon hosted by Aquino, Davutoglu said “now it is time to make a pragmatic shift in our relations from good relations to strategic cooperation.”

Davutoglu described the Philippines as a “rising star” in Southeast Asia, citing its 7.8-percent economic growth during the first quarter last year.

“We will continue to consult each other, to work together as two rising economies,” the prime minister said, noting Turkey’s chairmanship of the G-20 and the Philippines’ hosting of the Asia-Pacific Economic Cooperation (Apec) Leaders’ Meeting next year.

“We see the Philippines as our strategic friend and partner in this part of the world,” he said.

Davutoglu sounded quite upbeat on the prospect of stronger economic ties between Turkey and the Philippines, saying they should increase the current trade volume of $300 million to $1 billion “as early as possible.”

To do this, Aquino said a joint economic commission would be convened in Ankara by next year “to outline the approaches necessary in realizing our shared objective.”

Both governments signed an air services agreement, allowing “designated carriers to operate direct flights between the Philippines and Turkey, and help boost tourism, trade and investments.”

“We will try to upgrade our air transport in order to avoid the difficulties because of the geographical distance [between Turkey and the Philippines],” Davutoglu said. “Turkish Airlines wants to fly every day to Manila.”

Jose said Philippine Airlines was designated as the official carrier for the Philippines.

Turkey has designated Turkish Airlines as its official carrier, he said.

Aquino took the opportunity to brief the Turkish prime minister on the territorial disputes in the South China Sea, 90 percent of which is being claimed by China.

The President said Davutoglu “agreed that maritime disputes should be settled in a peaceful manner and in accordance with international law.”

“The prime minister noted that the Philippines’ decision to pursue arbitration is one that advances a durable and peaceful resolution to the issue,” Aquino said.

“Likewise, Turkey stands with the Philippines in calling for the full and effective implementation of the 2002 Declaration on the Conduct of Parties in the South China Sea, as well as an expeditious conclusion of a legally binding code (of conduct),” he said.

Davutoglu thanked Aquino for the hospitality and repeatedly invited him to visit Turkey soon.

“I can assure you Mr. President, whenever you are in need of assistance, Turkey, despite [the] geographical distance, will be the first one to come here and to be with you shoulder to shoulder to face any challenge,” he said.

“This is an assurance from us in the name of the Turkish nation, our president, and all government agencies. This is a good start,” he added.

Davutoglu will tour Fort Santiago in Manila at 1:20 p.m. Tuesday before flying back to Ankara at 2:45 p.m.–With a report from Christine O. Avendaño

Aquino hopes to help Turkey vs threats like ISIS