Turkey PM in PH for bilateral talks with Aquino 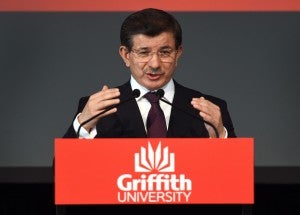 MANILA, Philippines – The Prime Minister of Turkey is in the Philippines for his first visit to the country where he will discuss bilateral relations with President Benigno Aquino III.

“The Turkish Prime Minister Ahmet Davutoğlu, will visit the Philippines November 17, with a delegation of about 111. He will be traveling with his wife, Mrs. Sare Davutoğlu,” the Department of Foreign Affairs (DFA) said in a statement.

He and his delegation will be welcomed in an official luncheon in Malacañan Palace after a wreath-laying ceremony at the Rizal Monument in Rizal Park,

The Prime Minister is also set to visit a school in Manila where a donation of computers will be made. He is also scheduled to deliver a speech at the DFA on Turkish Foreign Policy, the DFA said.

“Turkey has taken great interest in the Philippine Peace Process with the Moro Islamic Liberation Front, through its participation as member in the International Contact Group and as chair of the newly-formed Independent Decommissioning Body,” the DFA said.

“It is also a member of the Peace Committee for Southern Philippines formed by the Organization of the Islamic Conference that facilitates the review of the 1996 Peace Agreement with the Moro National Liberation Front,” it said.