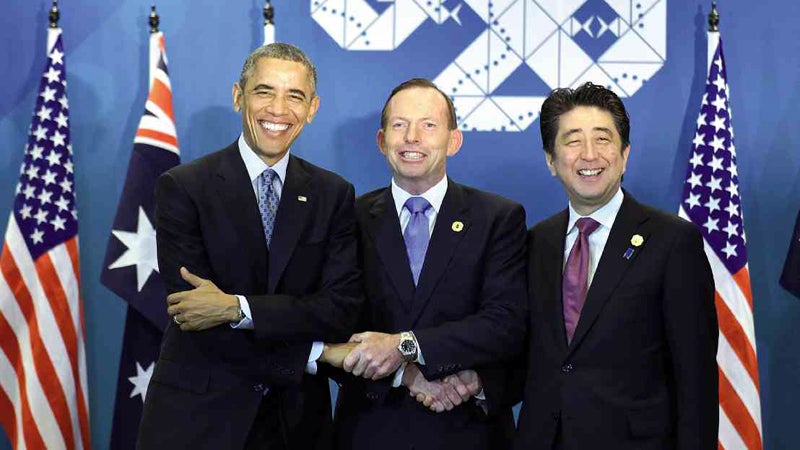 BRISBANE, Australia—American, Australian and Japanese leaders on Sunday called for peaceful resolutions of maritime disputes, a day after US President Barack Obama warned of the dangers of outright conflict in Asia as China contests disputed territory.

The trio said they were committed to deepening their already strong security cooperation in the Asia-Pacific, which comes amid China’s increasingly assertive expansion in the region.

Beijing is locked in dispute with four Southeast Asian countries—Brunei, Malaysia, the Philippines and Vietnam—over lonely outcrops in the South China Sea, and with Japan over uninhabited islets in the East China Sea.

At a summit of East Asian leaders in Burma (Myanmar) earlier last week, the Philippines, which has taken the territorial dispute to the United Nations for arbitration, challenged China to stop land reclamation and aggressive maritime patrols in the West Philippine Sea, part of the South China Sea within the Philippines’ 370-kilometer exclusive economic zone, to match its diplomatic overtures in the region.

The rivalry between China and Japan over islands in the East Sea known to the Japanese as Senkaku and to the Chinese as Diaoyu has been intense, with Beijing setting up an air defense zone over the area last year that was denounced by the United States.

Meeting in Brisbane on the sidelines of the G-20 Leaders’ Summit, Obama, Abbott and Abe said their partnership aimed to ensure a peaceful, stable and prosperous future for the Asia-Pacific region.

“They noted that this partnership rests on the unshakable foundation of shared interests and values, including a commitment to democracy and open economies, the rule of law and the peaceful resolution of disputes,” the statement said.

“The three leaders reaffirmed the global reach of their cooperation and the value of comprehensive US engagement in the Asia-Pacific region,” it said.

But there were no announcements on specific military exercises or new troop deployments within the region.

White House officials insisted that the three-way talks on the sidelines of the G-20 summit were not meant to send a message to China.

But in advance of Obama’s meeting with Abbott and Abe, the US president pressed China to “adhere to the same rules as other nations whether in trade or on the seas.”

Obama has repeatedly denied that the United States is bent on thwarting China’s economic and political emergence, but he has stressed that Beijing must be a responsible actor on the world stage.

In a speech in Brisbane on Saturday, he warned of the dangers of outright conflict in Asia and vowed that Washington would remain anchored in the region.

The US president said while there had been stunning economic progress in Asia since World War II, there were also genuine dangers, saying there were “disputes over territory—remote islands and rocky shoals—that threaten to spiral into confrontation.”

The prospect of a stronger tripartite alliance, which the leaders said would include enhanced cooperation on trilateral exercises, maritime security capacity building and maritime domain awareness, may rankle Beijing.

China has repeatedly warned of what it says is the danger of Japan “remilitarizing” under Abe, and regularly lambastes Tokyo for its apparent lack of repentance for misdeeds before and during World War II.

Abe signaled his eagerness to lift defense ties with Washington and Canberra in an opinion piece for the Australian Financial Review published on Friday, calling for “a peaceful, secure and prosperous future for the Asia-Pacific region.”

For his part, Chinese President Xi Jinping told Financial Review that Beijing was ready to increase defense cooperation with Australia, which has long profited from China’s voracious demand for its natural resources.

The three leaders met on the margins of a G-20 Leaders’ Summit at which the Australian prime minister has stressed the need for an economic agenda to spur the world economy.

Before reporters were ushered out of the room, Abbott said at the beginning of the meeting: “It’s good to be here with two such economic and strategic partners.”

While dogged by disputes with Russian President Vladimir Putin over Ukraine, the G-20 summit was expected to wrap up later on Sunday with calls to suppress the Islamic State group and to take collective action against the Ebola outbreak.

In their joint statement, the US, Australian and Japanese leaders said they had resolved to tackle each of these pressing issues.–Reports from AFP and AP