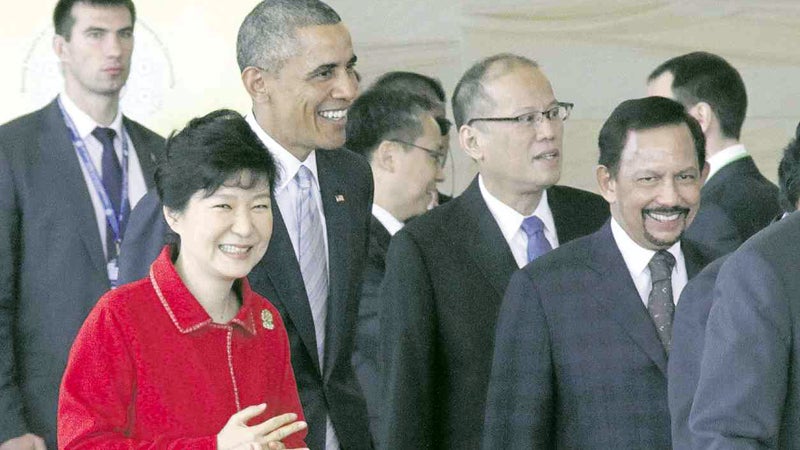 NAYPYITAW, Burma—President Aquino on Thursday challenged China to take “concrete action” in the South China Sea to match its diplomatic overtures in the Southeast Asian region.

Speaking at the dialogue between the 10 Southeast Asian countries and China near the close of the 25th Association of Southeast Asian Nations (Asean) Summit here, Aquino said the group was “concerned about developments” in the South China Sea, referring to China’s reclamation of land and occupation of islets and reefs in the West Philippine Sea, part of the sea within the Philippines’ 370-kilometer exclusive economic zone.

Buoyed by support from other Asean leaders for the Philippines’ arbitration case against China in the United Nations, President Aquino pressed for the conclusion of a legally binding code of conduct between Asean and China that would prevent conflicting claims in the South China Sea from erupting into conflict.

Aquino said that as a partner of Asean, China had to “demonstrate to the rest of the world” that it can, jointly with the Southeast Asian bloc, deal with security concerns in the region “based on the rule of law.”

“We in the Asean value practical cooperation and early harvest measures, including hotlines and search and rescue arrangements,” Aquino said, referring to talks between Asean and China on the nonbinding Declaration of Conduct of the Parties in the South China Sea signed by both sides in 2002.

“These activities, however, can only be meaningful if there are concrete, positive developments [in] the waters of the South China Sea,” Aquino said.

Addressing Chinese Prime Minister Li Keqiang and his fellow Asean leaders, Aquino pressed for the “early conclusion” of such a code of conduct between China and Asean.

“This does not necessitate reinventing the wheel. We can source the elements of the proposed [code of conduct] from existing norms and international conventions that promote good conduct,” Aquino said.

The President said tensions over rival claims in the South China Sea were not an issue only between Asean and China but also for countries outside the region that have legitimate and strategic interests in the sea, as a substantial percentage of world trade passes through the disputed waters every year.

“I appreciate the warm conversation I had with President Xi Jinping in Beijing just two days ago. We agreed to work on improving relations between our two countries. I believe that relations can be improved without sacrificing our advocacies, including efforts to clarify maritime entitlements through arbitration,” Aquino said.

China, however, offered only a “friendship treaty” with Asean, saying territorial disputes in the South China Sea should be settled directly between the countries involved.

Besides the Philippines, Vietnam, Brunei, Malaysia and Taiwan also claim parts of the South China Sea, 90 percent of which China claims, including waters close to the shores of its smaller neighbors.

“China … stands ready to become the first dialogue partner to sign with Asean a treaty of friendship and cooperation,” Li told the Asean leaders.

The treaty is seen as an attempt by Beijing to dispel any notion it is a threat.

Li said China was willing to sign legal documents with more countries in the region on good-neighborliness and friendship.

Still, the Chinese premier reiterated Beijing’s resolve to safeguard its territorial sovereignty and its position that disputes concerning the South China Sea should be settled directly rather than collectively or through arbitration.

The competing maritime claims have formed an undercurrent of tension at the East Asian and Asean summits here this week.

The Philippines has previously irked Beijing by seeking international arbitration over China’s claims to nearly all of the South China Sea.

Diplomatic sources from the Philippines reacted coolly to China’s treaty proposal, saying that it lacked substance and was similar to a 2012 proposal made by Manila and ignored by Beijing.

Li was to meet the heads of Asean countries behind closed doors later on Thursday, with the Southeast Asian leaders hoping to persuade their giant neighbor to take a less bellicose approach to overlapping claims in the South China Sea.

Closer ties with US

The Philippines and Vietnam have sought closer US ties to counter what they see as China’s aggression in the region.

In May, China sent an oil drilling rig to waters claimed by the Vietnamese. The move sparked deadly anti-Chinese riots in Vietnam.

US President Barack Obama, also in Naypyitaw to attend the East Asian summit, was to hold his first formal meeting with Vietnamese Prime Minister Nguyen Tan Dong on Thursday.

US engagement with Vietnam has entered a new phase in recent months after a flurry of high-level visits that culminated in the Oct. 2 decision by Washington to start easing a nearly four-decade lethal arms embargo.

Late on Wednesday, President Aquino told reporters that he had received support from other Asean leaders, some publicly speaking and others in private, for the Philippine case in a UN arbitration tribunal challenging China’s claim to almost the entire South China Sea.

“Because of our efforts and other countries’ efforts, they now have to start at least the preparatory talks leading to [negotiations for a binding code of conduct],” Aquino said. “So we’re closer than we were when we started.”

Negotiations for a legally binding Asean-China code of conduct in the South China Sea have not started 12 years since the Philippines made the proposal.

During the two-day summits that included talks with regional powers India, Japan, South Korea, the United States, Australia and New Zealand as well as United Nations Secretary General Ban Ki-moon, President Aquino called for the rule of law, particularly the UN Convention on the Law of the Sea (Unclos), in the settlement of the South China Sea disputes.

Aquino acknowledged that he has toned down his statements in this year’s summits compared to the “more heated” statements he gave in the last two summits when China renewed its incursions into the West Philippine Sea.

“Compared to the statements in Phnom Penh (in Cambodia), I will liken this to be gentle reminders as opposed to very strong statements, especially in Cambodia in 2012, [in] the 10th year of the failure to come up with a code of conduct,” he said.

In this year’s Asean summit hosted by Burma (Myanmar), which is traditionally friendly to China, the South China Sea dispute was placed at the top of the agenda together with the Asean economic integration starting next year.

Aquino said his brief talk with Xi in Beijing did not change the Philippines’ intent to pursue arbitration in the United Nations.

He said Xi did not ask him to withdraw the Philippine arbitration case.

“They might present a different solution that is acceptable to us then. Once it’s presented, why won’t we try and explore that possibility and resolve this issue?” he said.

After a series of summits, the regional leaders were expected to issue joint statements covering their discussions.

Below are highlights from the draft “final” statements, which were written ahead of the meetings and circulated even before the talks began:

Territorial disputes in the South China Sea, which is of tremendous strategic importance to everyone, including Washington, need to be solved peacefully and through dialogue. Southeast Asian nations and China should work toward the early conclusion of a Code of Conduct in the South China Sea.

Ebola poses a global threat to peace and security and relief assistance is needed to help fight the deadly virus in the hardest-hit West Africa nations, home to most of the world’s 5,000 deaths. When necessary, leaders from Southeast Asian nations will seek technical assistance from the World Health Organization to help detect and respond to public health threats.

The participants reiterated that they supported efforts to restore law and order inside Iraq as it—and the world at large—struggles with threats posed by the Islamic State group. They called on Iraq and international partners to ensure the protection of civilians and access to humanitarian assistance for those affected by the conflict. They demanded the immediate, safe and unconditional release of all those who are kept hostage by the group or associated individuals and entities.–With wire reports

Aquino in Burma not to pick fight with China