PH raring for Asean Integration with resurgence of manufacturing 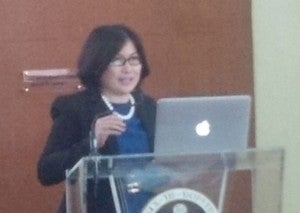 MANILA, Philippines – The manufacturing industry in the Philippines is seemingly experiencing a resurgence and its potential should be tapped as the Association of Southeast Asian Nations (Asean) Integration in 2015 nears, a trade official has said.

Assistant Secretary Rafaelita Aldaba of the Department of Trade and Industry (DTI) said the Philippine economy has been dependent on the services industry.

“But when we look at a lot of the successful countries they were able to increase manufacturing by as much as 30 percent,” she said at the Ateneo Professional Schools’ forum on the Asean Integration on Wednesday. “We want to transform the economy. We want to grow the manufacturing industry.”

Aldaba, who used to be the acting vice-president of the Philippine Institute for Development Studies (PIDS), was very optimistic of the manufacturing industry’s growth, which had gone up by 7.3 percent in 2012 and 9.3 percent in 2013.

“A lot of signs indicating a resurgence of the manufacturing industry,” she said.

And with the Asean member states preparing for the realization of the Asean Economic Community (AEC), a single market composed of 600 million people, manufacturing will help boost the Philippines’ competitiveness.

The AEC, which will integrate the markets of the 10 Asean member states, aims to pave the way for the free flow of goods, services, investment and skilled labor in the region.

However, Aldaba pointed out that a lot of work still needs to be done.

Aldaba said that can be done following the industry road map, which is divided into three portions. The short-run (2014 to 2017) will focus on maintaining competitiveness of comparative advantage industries, strengthening emerging products and rebuilding existing capacity of industries. The medium -run (2017 to 2021), on the other hand, emphasizes a shift to high value-added activities and investments in upstream or core sectors, in addition to linking industries. Meanwhile, the long-run (2021 to 2025) aims to have a globally competitive manufacturing industry.

In her presentation, Aldaba shared Stan Shih’s smile curve, which illustrates the value-added potential of each component of a value chain. It shows that manufacturing, although a crucial part of global value chains, has a lower value-added contribution as compared to concept-research and development, design, branding, marketing, distribution and sales. 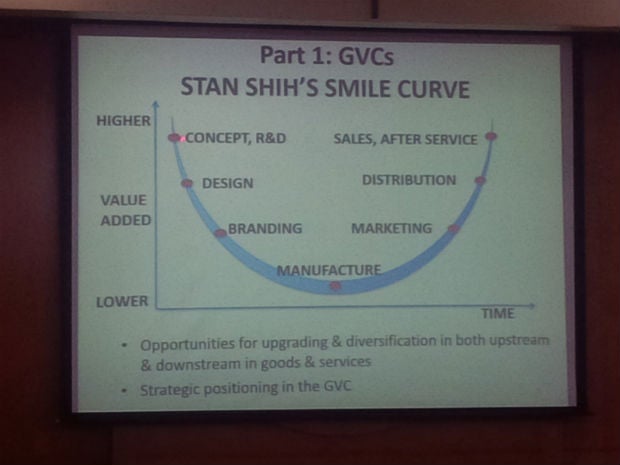 She explained that while iPhones are being made in China, 58.5 percent of the sales still go to the US where high-value functions are retained.

Aldaba said that the global value chains are important in improving the competitiveness of countries and that regional industrial networks are often located in economies with comparative advantage.

“How do we go up the global value chain? How do we position ourselves?” she asked the audience.

She said this could be done by improving technology, investing more in research and development and other forms of upgrading.

“For manufacturing to succeed, there are five required elements: materials, skills, energy, capital, and technology,” she said.

The DTI officials said the new industrial policy of the government is also now global value-chain-oriented.

In the end, Aldaba said that with or without the Asean Integration, the Philippines needs to pursue a new industrial policy to make the country’s industries competitive.