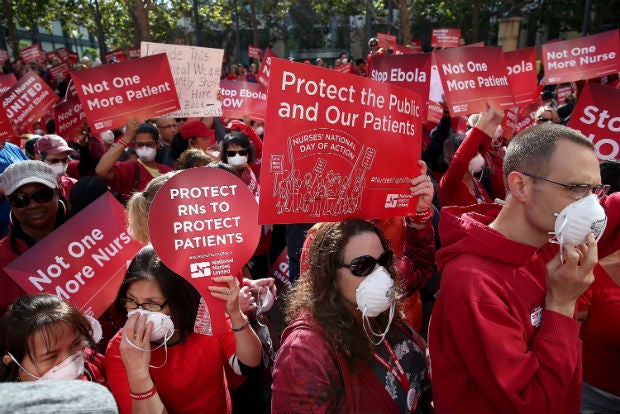 Nurses wear masks and hold signs as they participate in a demonstration outside of the Dellums Federal Building on November 12, 2014 in Oakland, California. Hundreds of nurses with the California Nurses Association and the National Nurses United staged a demonstration as part of a national day of action to bring attention to the lack of training and protective equipment for health care workers who could be exposed to the Ebola virus. Justin Sullivan/Getty Images/AFP

WASHINGTON–Several dozen nurses at a Washington hospital demonstrated Wednesday outside the White House, saying they are woefully ill-prepared to handle an Ebola case.

They were among thousands of health care workers taking part in protests in the United States and overseas, including in the Philippines, amid fears the Ebola epidemic might spread beyond West Africa.

“Ebola is just one plane ride away,” said emergency room nurse Kelly Fields of Providence Hospital in Washington, where unionized nurse staff are negotiating their first collective agreement with management.

In blue scrubs and red union T-shirts, the nurses demanded an ample supply of full-dress protective suits as well as the training to use them.

“It’s a major concern for us… It only takes one person to come to our emergency room and from there we’re really not sure what to do,” said intensive care nurse Aster Goitom.

Two nurses are among the nine confirmed Ebola cases that have been treated in the United States. Both women had helped to care for a Liberian man who died of the virus in a Texas hospital.

In a statement, Providence Hospital, which is affiliated with the Roman Catholic Church, said it was prepared to identify and treat patients with highly communicable diseases, including Ebola.

Similar demonstrations were scheduled to take place Wednesday in Australia, Canada, Ireland, the Philippines and Spain, it said in a statement.

The United States has more than 2.7 million registered nurses, according to the Kaiser Foundation, a national health policy think tank.