Welcome home! See you in 21 days 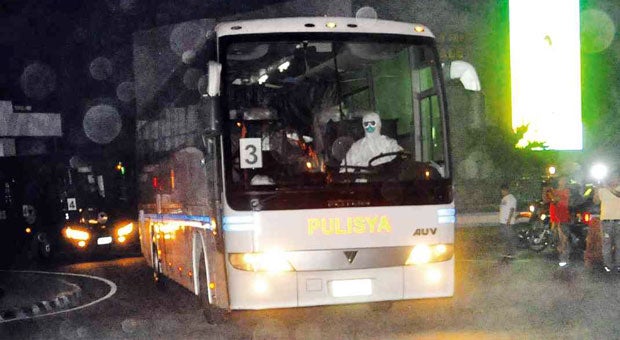 HEAD TO FOOT PROTECTION Wearing a face mask and a full protective suit, a bus driver is set to transport Filipino peacekeepers, who arrived from West Africa, from the Villamor Air Base in Pasay City to Sangley Point in Cavite province, where they were to take a boat for Caballo Island on Manila Bay. The peacekeepers will be quarantined for 21 days on the island to ensure that they are free of the deadly Ebola virus. RICHARD A. REYES

MANILA, Philippines–“That’s him! That’s your daddy!”

As if by instinct, Therese started shouting these words to her 3-year-old daughter, the mother’s eyes glued to a man in green on the big screen in front of her.

The Department of Health and Philippine Air Force (PAF) have requested the media not to use the real names of the peacekeepers’ relatives to prevent them from being stigmatized in their communities.

The man—whose facial features could not even be recognized because of the pixelated image—looked just like the rest of the other men shown in the monitor installed at the PAF Museum. But Therese insisted she was pointing at her husband of 14 years.

“I know him! That’s his walk!” she said, mimicking the gait of the United Nations peacekeeper, who, along with 132 others, arrived in the country on Wednesday after their tour of duty in Ebola-stricken Liberia.

As a “precautionary measure,” Therese and the peacekeepers’ other loved ones were not allowed to stay at Villamor Grandstand, where the Russian aircraft carrying the men in uniform landed around 5 p.m. after what Lt. Col. Enrico Canaya, Air Force spokesman, said was a 17-hour flight.

It was unclear from the screen if the welcoming personnel all wore gloves.

After passing through thermal scanners and after being given a brief welcome by the Air Force chief, Major Gen. Jeffrey Delgado, the peacekeepers boarded at least two buses that Canaya said would take them to Sangley Point in Cavite province.

From Sangley, the contingent will board a vessel provided by the Philippine Navy to ferry them to Caballo Island on Manila Bay where they would be quarantined for 21 days, Canaya said.

He said there would be “support staff” stationed on the island in case any of the peacekeepers exhibits symptoms of the disease.

However, the support team, composed of an unspecified number, would be separated from the UN men.

Like Therese, Jenny said she was sure she had identified her husband of more than 30 years correctly because of his walk. 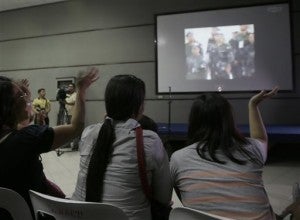 Relatives wave as they watch a video of the arrival of more than 130 Filipino soldiers and police via a chartered flight from Liberia Wednesday, Nov.12, 2014 at Villamor Air Base in Pasay City. The relatives had to watch the arrival via video because of the quarantine situation. AP PHOTO/BULLIT MARQUEZ

“He walks like a soldier! Snappy!” her 16-year-old daughter chimed in.

The daughter proudly added her father was always among the first in a line, with the officers.

“I’m sure that was him!” the teener said, adding she was “really excited” to see her father after 21 days.

All throughout the viewing, which lasted more than 30 minutes, the mood was festive inside the function room of the PAF Museum.

In several instances, the spectators would applaud. At one point a woman was heard announcing over the microphone: “There they are! The heroes!”

There were a few technical glitches though.

For example, the Internet connection appeared to have been disrupted, as no image could be seen being transmitted from the grandstand to the monitor.

“It doesn’t matter. That made me happy,” Jenny said when asked what she thought about the technical disruption, her eyes lighting up.

Call it security overkill, but the Philippine Navy is not taking any chances to ensure the safety of the 108 Filipino peacekeepers who returned on Wednesday from Liberia.

The Navy, which is maintaining Caballo island where the peacekeepers start their quarantine Thursday, is enforcing a no-fly zone and no-sail zone for mariners and civilians 1,000 yards off the shore.

The peacekeepers were immediately brought by ship to the island upon touchdown of their UN-chartered Russian plane at the Villamor Air Base Wednesday for the quarantine.

Lt. Col. Harold Cabunoc, chief of the Armed Forces of the Philippines’ public affairs office, said AFP Chief of Staff Gen. Gregorio Pio Catapang Jr. left it to the Navy officials to secure the island and the peacekeepers.

Cmdr. Edgard Arevalo, Navy spokesman, said the Civil Aviation Authority of the Philippines would implement the no-fly zone in Caballo island while the Navy would ensure water security 1,000 yards before reaching the Caballo island.

He said the Navy would coordinate with the Philippine Coast Guard in giving notice to all mariners to avoid the area.

Arevalo justified the strict security arrangements made on the island.

“The fact being Caballo island is a Philippine naval facility (Naval Station Caballo), there is a restriction only with respect to overflight elevation and the distance to be no closer than 1,000 yards from the naval facility,” Arevalo said.

“This is not, therefore, an absolute prohibition,” he said.

Catapang has ordered Task Group Liberia, a contingent of soldiers tasked among other things with securing the arriving troops, to provide recreational and medical facilities to the peacekeepers while they are isolated from the general population.

The facility is also equipped with cable TV and Internet access to enable peacekeepers to contact their loved ones.–With a report from Cynthia D. Balana

Kin of peacekeepers ecstatic to see loved ones

PH soldiers from Liberia to be quarantined on island, not Tarlac