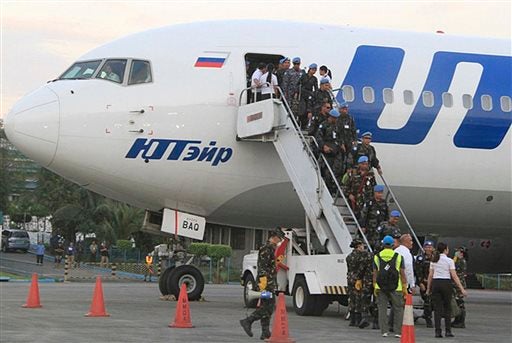 In this photo provided by Armed Forces of the Philippines, Filipino soldiers and police officers disembark from their chartered flight from Liberia upon arrival Wednesday, Nov.12, 2014 at Villamor Air Base at suburban Pasay city south of Manila, Philippines. AP

As if by instinct, “Therese,” not her real name started shouting these words to her three-year-old daughter, her eyes (Therese’s) glued to a man in green projected on the big screen in front of her.

The man — whose facial features could not even be recognized because of the pixellated image — looked just like the rest of the other men shown in the monitor installed at the Philippine Air Force Museum, but “Therese” insisted she was pointing at her husband of 14 years.

“I know him! That’s his walk!” she said, mimicking the stride of the United Nations peacekeeper, who, along with 132 others — arrived in the country on Wednesday after their tour of duty in Ebola-stricken Liberia.

As a “precautionary measure,” “Therese” and the peacekeepers’ other loved ones were not allowed to stay at the Villamor Grandstand, where the Russian aircraft carrying the men in uniform descended around 5 p.m. after what Lt. Col. Enrico Canaya, Air Force spokesperson, said was a 17-hour flight.

It was unclear from the screen if the welcoming personnel, who appeared to be few in number, all wore gloves.

Canaya said, however, that all the necessary measures had been put in place for the arrival of the peacekeepers.

“To be clear, (the peacekeepers all tested) negative (for Ebola). These are just precautionary measures,” Canaya said.

After passing through thermal scanners and after being given a brief welcome by Air Force Chief Jeffrey Delgado, the peacekeepers boarded at least two buses that Canaya said would take them to Sangley Point in Cavite.

From Sangley, he said the contingent would board a “vessel” provided by the Philippine Navy so they could go to Caballo Island in Manila Bay where they would be quarantined for 21 days, Canaya said.

He said there would be “support staff” stationed on the island to take care of peacekeepers exhibiting symptoms of the disease.

He added, however, that the support team composed of an unspecified number would be separated from the UN men.

Like “Therese,” “Jenny” said she was “100 percent” sure she had identified her husband of more than 30 years correctly because of his walk.

“He walks like a soldier! Snappy!” her 16-year-old daughter chimed in.

The minor proudly added her father was always among the first in a line, with the officers.

“That’s him! I’m sure that was him!” the minor said, adding she was “really excited” to see her father after 21 days.

All throughout the viewing, which lasted for more than 30 minutes, the mood was festive inside the function room of the PAF Museum.

Several instances, the spectators would applaud.

At one point, a woman was heard announcing over the microphone, “There they are! The heroes!”

There were a few technical glitches though.

Once, for example, the Internet connection appeared to have been disrupted, as no image could be seen being transmitted from the Grandstand to the monitor.

“It doesn’t matter. That made me happy,” “Jenny” said when asked what she thought about the technical disruption, her eyes lighting up.

Kin of peacekeepers ecstatic to see loved ones