Asean summit gets underway in Myanmar

President Benigno Aquino III was the last of the Asean leaders who were welcomed by host, Myanmar (Burma) President Thein Sein and his wife Khin Khin Win at the lobby of the Myanmar International Convention Center.

The President, who planed in a little after 11 p.m. Tuesday (around 12:30 a.m. Wednesday in Manila) after a five-hour trip from Beijing, China, shook hands with the Myanmar leader and his wife. 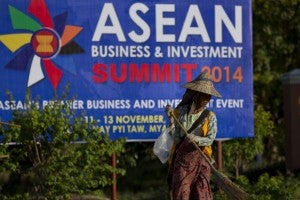 After shaking hands and exchanging pleasantries, Aquino checked his watch as he was led by Myanmar president to leave the stage to head to the Jade Hall.

Myanmar, which remains under a military regime, is chairing the 10-nation Asean for the first time.

The summit takes place with just a year to go before the start of the Asean economic integration by the end of 2015.

During the Asean Summit and the 9th East Asia Summit that follows, the Asean leaders will also hold talks with their counterparts from China, Japan, South Korea, India, Australia, New Zealand, Russia, the United States as well as the United Nations.