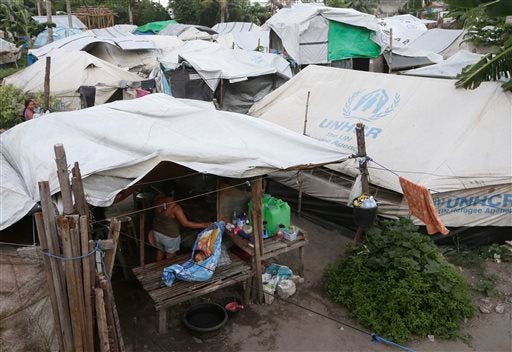 MANILA, Philippines–The head of the United Nations Office for Disaster Risk Reduction has expressed concern over the slow relocation of many survivors of Super Typhoon “Yolanda” to permanent shelters, prompting them to rebuild their homes in “danger zones.”

Margareta Wahlstrom on Tuesday said that one year after the typhoon (international name: Haiyan), “only 150 households have been relocated to permanent shelters as part of the government housing program.”

“Survivors are complaining about the rebuilding process which, according to them, is far too slow,” Wahlstrom said in a statement.

Wahlstrom said, “Land tenure is a major hurdle to the resettlement program … adding to the frustration of many people who want a new home now.”

“Too many people have already rebuilt their homes in danger zones using unsafe materials,” she said.

“They are the first of 1,000 homes that will be delivered by SM Care Village, SM Prime’s foundation, by the end of the year to poor families displaced by the typhoon,” she said.

She said that “with so many people still displaced or living in temporary shelters, the private sector is an obvious partner in the recovery process.”

“The 200 houses … are disaster-resilient with high quality roof slabs and concrete walls, which can withstand a Category 5 supertyphoon,” Wahlstrom said.

Wahlstrom also said: “If we know that the percentage of the world’s economy exposed to cyclones has grown dramatically over the last 40 years as a consequence of economic development and that the private sector is responsible for over 70 percent of that investment, then it makes absolute sense to introduce the private sector to disaster risk management.”

Also on Tuesday, British aid groups said the delivery of assistance to Yolanda victims was hampered by poor coordination between local authorities and the international community.

A study of the aid delivery by five charities found there had been a lack of communication between international aid providers, their local counterparts and the government.

Lacker blamed this partly on the unprecedented damage caused when Yolanda smashed into a giant stretch of islands, devastating whole towns.

Although foreign and local assistance was quickly on the scene, problems soon emerged, representatives of local nongovernment organizations (NGOs) said at the launch of the report.

Local NGOs had difficulty meeting with the stringent reporting and accounting systems of the international groups while the government was overwhelmed as the typhoon killed many rescuers trained to help with relief efforts.

There were cases of duplication of efforts with large amounts of aid going to the same people while others were given nothing.

Despite these problems, the recovery had been relatively swift, David Carden, country director of the UN Office for the Coordination of Humanitarian Affairs said.

“There are always things that can go better,” he said.

Caritas Manila, the social services and development agency of the Archdiocese of Manila, has received donations amounting to P268.3 million in cash and in kind in the aftermath of Yolanda.

Caritas Manila initially released P140 million worth of cash and in-kind donations to those affected.

As the needs of affected families vary, other nonfood items were distributed to each family through the affected dioceses.

PH ranks 6-7 on disaster readiness; could do better