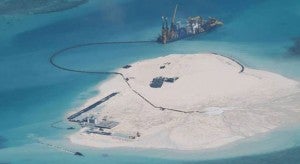 YANGON, Myanmar – Fresh diplomatic sparring over who owns what in the South China Sea (West Philippine Sea) is likely to break out this week at a major regional summit in Myanmar, after a year in which China jacked up tensions in the resource-rich waters.

Rival claims have gnawed away at ties between Southeast Asian nations including Vietnam and the Philippines and regional powerhouse China, which claims nearly all of the sea, including waters near its smaller neighbors’ shores.

The issue has also become a key testing ground for diplomacy between China and the United States, which has cozied up to the 10-member Association of Southeast Asian Nations (Asean) as part of a wider eastwards foreign policy “pivot”.

Leaders including US President Barack Obama, Chinese Premier Li Keqiang and Indian Prime Minister Narendra Modi will gather in Naypyidaw for the two-day Asean summit from Wednesday which also takes in an expanded list of dignitaries for the East Asian Summit.

When he meets Asean leaders, Obama “will highlight US leadership in addressing maritime territorial disputes,” according to National Security Advisor Susan Rice.

Other security issues, such as countering the rise of self-proclaimed Islamic State and the Ebola epidemic, will also be on the table, she added.

Beijing has been accused of aggression after boosting naval patrols in waters contested with the Philippines and positioning an oil rig in seas disputed with Vietnam in May, sparking deadly anti-Chinese riots.

It has given ground on low-level talks with Asean towards a multilateral, binding code of conduct to governing the seas.

But analysts and diplomats are skeptical of a tangible deal, as China prefers bilateral talks with its smaller neighbors, allowing it to exert its massive economic and political leverage in a region dependent on Chinese trade.

The waters are a vital shipping lane also believed to contain vast oil and mineral deposits. Parts are also claimed by Brunei, Malaysia, Taiwan and Vietnam.

“I don’t see any breakthrough in Naypyidaw or anytime soon,” one Southeast Asian diplomat told Agence France-Presse ahead of the summit.

“Let’s face the reality that it’s a complex issue and in addition, Asean is dealing with China, a major Asian and world power.”

Observers say a softening of Chinese rhetoric in recent weeks, including the removal of the oil rig from Vietnamese waters and two high profile diplomatic visits to Hanoi, does not amount to a strategy shift from Beijing.

“Some rabbit might be pulled out of the hat to impress the end of year summit meetings, but nothing substantial has occurred or is likely to occur.”

In early October, Chinese state media said a 2,000 meter runway had been completed on Woody Island, part of the contested Paracels, in an apparent bid to build up bridgeheads in the area.

“This struggle will move to another phase, even more drastic and complex,” he told the National Assembly.

While China singes relations, the US has moved in to bolster its alliances.

Obama, who arrives in Myanmar from a major Beijing summit, will meet Vietnamese Prime Minister Nguyen Tan Dung in Naypyidaw.

The meeting comes after a US agreement to partially ease a 40-year ban on arms sales to its one-time war foe, citing some “modest” progress in human rights.

In April, Washington also signed a defense pact with the Philippines, which is outraged that China has effectively taken over the contested Scarborough Shoal.

That deal will eventually allow thousands of US troops to be stationed in the country.

But American efforts to make friends have irked China, which insists it is seeking its own amicable resolution to disputes in its neighborhood.

At an Asean security meeting in August, China accused its rival superpower of deliberately stoking tensions in the South China Sea and rejected a proposal by US Secretary of State John Kerry for a freeze on provocative actions in the region.

With no deal in sight the issue looks set to worry relations between Washington and Beijing for years to come, said Bill Hayton the author of “The South China Sea – the struggle for power in Asia”.

“So the region is condemned to a complex game of diplomatic and military competition for the next few decades at least,” he added.