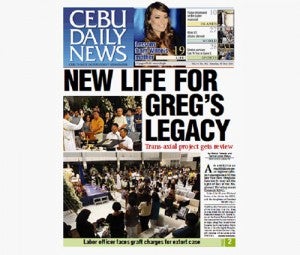 An ambitious multibillion-peso highway project championed by the late Vice Gov. Gregorio Sanchez Jr. may see the light of day at the Regional Development Council (RDC).

Cebu City Mayor Michael Rama, who chairs the RDC, said the daughters of Sanchez will give him their father’s plans for the P45-billion trans-axial highway project that will span the towns of Daanbantayan in the north to Santander in the south.

The mayor, who ran under the Liberal Party (LP) banner along with Sanchez, announced this even as preparations were finalized for the funeral of the vice governor, who died of stage 4 lung cancer late last month.

“I want to know what its status at the present,” Rama said.

Regional Director Marlene Rodriguez of the National Economic Development Authority in Central Visayas (NEDA-7) said the proposal had yet to be endorsed by the Capitol.

Sanchez’s proposal was shelved a little before his political ties with Cebu Gov. Gwendolyn Garcia deteriorated.

The highway project, which covers more than 500 kilometers, will pass through the Central Cebu mountains from tip to tip.

President Benigno “Noynoy” Aquino III received a copy of Sanchez’s plans from the vice governor’s daughters when he visited the wake last Thursday.

He said he will look into the project and see if it can be implemented within his term.

Rama, who will chair an RDC meeting on May 10, said he wants to know other projects that can be immediately endorsed to the national government for approval.

More than 100 vehicles are expected to join the funeral cortege of the vice governor, whose remains will be laid to rest at the Mactan Memorial Garden.

The vice governor’s coffin will be transported from the Crystal Palace Chapel of the Cosmopolitan Funeral Homes in upland barangay Lahug, Cebu City, in a flatbed four-wheeler truck decked with white and yellow flowers.

A big tarpaulin bearing the late vice governor’s images and names was placed in front of the truck.

Four honor guards of the 511th Naval Reserve Squadron, Philippine Navy will escort the truck that bears the seal of Cebu province. Two speakers will blare music upon the family’s request.

At 11:30 a.m., the late vice governor’s remains will be brought to Bantay Radyo for a short stop.

It will then proceed to the Cebu Provincial Capitol grounds where Capitol employees will be expected to pay their final respects to the late vice governor.

At 1 p.m., a final requiem Mass will be held at Redemptorist Church where his children are expected to give their messages for their father.

The funeral cortege will then pass by General Maxilom, heading straight to Highway Mandaue and passing by Innodata where Mandaue City police are designated to ensure security.

Sanchez’s remains will then be brought to Mactan Memorial Garden where his garden will be decorated with a white motif.

A letter request from Busay barangay captain Yody Sanchez requesting Governor Garcia to allow the passage of the funeral cortege was approved.

The governor advised the Mactan Cebu Bridge Management Board Secretariat, Philippine National Police (PNP) and the Department of Public Works and Highways (DPWH) to extend all the assistance needed during today’s cortege.

A entourage lineup has also been arranged. Sanchez’s favorite Jaguar vehicle, which bears the Cebu province seal, will lead the lineup followed by the flower vehicle bearing his picture and the flatbed funeral truck bearing his coffin.

The entourage will be followed by the Alterra vehicle boarded by his bodyguards, the family coaster, relatives, a media shuttle and several Kaoshiong buses.

Four buses from Tuburan town are also expected to join the cortege.

He was joined by Mayors Paz Radaza and Socrates Fernandez of Lapu-Lapu and Talisay cities respectively and Capitol department heads.

An 83-year-old construction worker who formerly worked for the late vice governor in his project on the National Power Corp. plant in Toledo City also managed to pay his respects to Sanchez.

Emeliano Trocio Sr., a resident of Toledo City, told Cebu Daily News that he tried his best to see the vice governor for the last time.

Evangeline de Paula, the vice governor’s chief of staff, was joined by staff and some of his scholars in delivering messages in last night’s final necrological service.