WASHINGTON, DC—As the Filipinos prepare to mark the first year anniversary of Typhoon Haiyan, Filipino American community leaders renewed their call to federal authorities to grant Temporary Protected Status (TPS) to 200,000 Filipino nationals in the US.

The National Federation of Filipino American Associations (NaFFAA) reiterated its appeal to the Department of Homeland Security (DHS) to “do the right thing” and allow undocumented Filipinos immigration relief for at least 18 months.”

“It will help the Philippines tremendously in its rebuilding efforts,” says NaFFAA National Chair JT Mallonga. “It’s been a year since November 8, 2013, when the devastation wreaked by Typhoon Haiyan took thousands of lives, displaced thousands more and destroyed their source of livelihoods. Immediate and positive consideration of this request is critical to their recovery.” 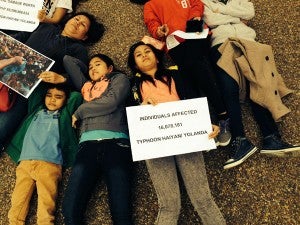 Mallonga added: “As we observe the first year anniversary of Typhoon Haiyan, we are grateful to the remarkable outpouring of international, U.S. government and community support and assistance. But we need to be constantly reminded that more needs to be done. And the granting of TPS will help immensely in the country’s reconstruction efforts. The one year anniversary would be a timely opportunity for the U.S. government to act.”

NaFFAA is mobilizing its members in all 13 regions to continue putting pressure on DHS. As a partner to the Relief to Recovery Coalition, which has been at the forefront of this campaign, NaFFAA is also joining efforts by several national organizations urging DHS and the US Customs and Immigration Services (USCIS) “to act and implement this important measure of relief on behalf of the millions of Filipinos who continue to feel the effects of the storm.”

The 2014 hurricane season has also continued to batter the Philippines with storms such as Hurricane Rammasu in August and “we are not yet out of the woods,” the NaFFAA statement says.

The Relief to Recovery Coalition, comprised of diverse organizations and individuals across the United States, came together in the aftermath of Haiyan and has consistently engaged DHS, USCIS, and the White House for the last eleven months calling for TPS.

On September 24, delegates from NaFFAA, US Pinoys for Good Governance (USPGG) and the Filipino American Legal Defense and Education Fund (FALDEF), met with Philippine Foreign Affairs Secretary Albert F. Del Rosario who unequivocally expressed support for the Philippines’ continuing request for the grant of TPS.

In letters to Secretary of State John Kerry and DHS Secretary Jeh Johnson on Sept. 22, Del Rosario underscored the importance of the request, saying its approval would not only alleviate the plight of eligible Filipinos in the US but also greatly ease the strain placed in the country’s infrastructure and resources.

“Many of my countrymen in the US were affected by Typhoon Haiyan,” he wrote. “This humanitarian assistance would provide temporary relief for them from the natural disasters.”

On August 13, NaFFAA officers discussed the urgency of granting TPS with DHS Assistant Secretary Alan Bersin and USCIS Director Leon Rodriguez in a meeting set up by Ambassador Jose L. Cuisia, Jr. at the Philippine Embassy.

Filipino American leaders from all over the U.S. joined NaFFAA, FALDEF and USPGG in pressing DHS to make a decision based on legal, economic and humanitarian grounds. In reply, DHS officials said they were weighing all the considerations based on the facts presented. They did not, however, indicate when a decision would be made.

Even before the Philippines formally filed for TPS designation in December, a few weeks after Typhoon Haiyan, Filipino American community organizations and church groups across the nation were already holding fundraisers and other ways to assist victims of the calamity.

The most powerful storm in history devastated the Central Visayas, killing more than 6,000 people and severely affecting more than 1.4 million others in 17 provinces.

Why TPS matters even now

PH urges US to okay TPS for undocumented Filipinos