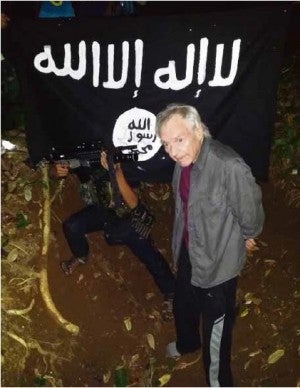 This photo provided by the Abu Sayyaf
shows German scientist Viktor Stefan Okonek, 71, with an assaultrifle pointed at his head at the terrorist group’s hideout somewhere in Sulu province. FILE PHOTO

ZAMBOANGA CITY, Philippines—To the chagrin of the Sulu provincial capital’s mayor who feared what a group of bandits could do with such amount of money, the Abu Sayyaf posted a video on Facebook Tuesday showing what it said was the P250-million ransom it received for the release of two German hostages last month.

The two-minute video was posted for reporters on an account that Muammar Askali, also known as Abu Rami, owns. The account was deactivated shortly afterward.

In the video, Askali and his fellow Abu Sayyaf militants showed stacks of money which, he said, was given to them by a government emissary for the release of Viktor Stefan Okonek and Henrike Dielen on October 17, six months after they were kidnapped.

It could not be immediately ascertained, however, if the bundles of money – in P1,000 bills – indeed totaled the demanded ransom of P250 million.

But Abu Rami, after the release of the victims, said they got “no more no less” than that amount.

“Alhamdullilah (All praise and thanks to God). This shows to counter the Philippine government that they said no ransom policy. And now for the sake of Shariah Islamiya Allah Subhanahu Wa Taa’la, (may He be glorified and exalted) that policy will be lost at this moment,” he said in the video, which was likely taken in October after the release of the hostages.

“Is that real money? Is that really P250 Million?” Mayor Hussin Amin of Jolo, the Sulu provincial capital, said when he was shown a photo taken from the Facebook post. “I just cannot imagine Sulu if indeed those bills are genuine and are in the hands of the Abu Sayyaf Group.”

“I am more concerned about what the money could buy,” added Amin, who was in Zamboanga City for a meeting on Wednesday.

He said he wanted to know “where the money came from.”

“There has to be a paper trail here. I doubt the money came from outside the country,” he said.

Amin had demanded an investigation into the reported payment of ransom to the Abu Sayyaf, saying it could adversely affect Sulu’s peace and security.

Local military and police officials refused to comment in the video and photo released by the Abu Sayyaf.

Lt. Col. Harold Cabunoc, spokesperson of the Armed Forces of the Philippines, said the military “will check the veracity of the video on the alleged ransom payment for the German hostages.”

“As of this time, we could not ascertain if the stash of paper bills that the ASG presented in the video is real ones. The AFP and PNP are continuously performing their mandated task to carry out law enforcement operations against the ASG,” Cabunoc said.

But an Inquirer source said that during the release of the two Germans, the “AFP was running the negotiation.”

The source, a member of the military’s intelligence community, said the military chartered a plane on Oct. 17, “with AFP officials on board.” The plane left Zamboanga at 5 p.m. and arrived in Jolo, Sulu two hours layer.

The source added that the “AFP was mad because allegedly there were media people monitoring near Central Bank when the money was withdrawn.”

Capt. Rowena Muyuela, spokesperson of the military’s Western Mindanao Command, said Li Pei Zhei was released by his abductors and turned over to PO1 Jimnazur Laja, a policeman in Alicia, Zamboanga Sibugay.

Zhei was reportedly brought by his abductors from Basilan to Alicia on a boat.

It was not clear whether ransom had been paid for the Chinese.