CALBAYOG CITY, Philippines — Relatives of Anthony Patrick Santianez, a missionary priest in Sierra Leone, say they fear for his health and even his life as he has insisted on staying on with his parishioners in the Ebola-stricken West African country.

The priest’s elder sister, Flerdeliza Santianez-Gaviola, who resides in Barangay (village) San Joaquin in this city, said their family worries about him but they have strong faith and believe God would protect him.

“We are worried because his life is at stake but we know that the Lord is there to guide and protect him through our prayers, Santianez-Gaviola said.

Last Oct. 29, the priest posted on his Facebook his reply to the Philippine government’s call on Filipinos in Sierra Leone, Liberia and Guinea to come home to avoid getting infected with the often deadly Ebola virus: “My answer was, is, and will be NO. I will stay here in Sierra Leone. I am still convinced that this is not a moment to leave this country.” 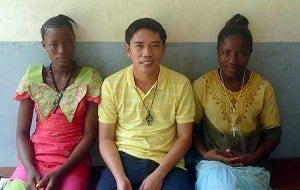 Fr. Patrick cited a passage from the evangelist John: “A good shepherd does not abandon the sheep when the sheep are under attack, but lays down his life for the sheep if necessary.”

His sister said the family had no choice but to support him in his chosen vocation.

“We will support him all the way. And we understand that his parishioners need him at this time; who will help them to have faith in God if they will be left behind?” Flerdeliza sai, adding the priest and the people of Sierra Leone were always in their prayers.

She recalled that even as a boy, her brother enjoyed helping others, especially the less fortunate, and serving God.

“He always extended help to those who were in need in his own simple way, and he was always happy about it,” Flerdeliza said. “He served in the Knights of the Altar in our parish. And he was very dedicated in serving the Church. He was active in different religious organizations, and when he reached college he asked our mother to let him enter the seminary.”

The old folk in Barangay San Joaquin remember the young Man-Man, the priest’s nickname, as an active parish worker, a youth leader who always took the wealfare of the community to heart.

Fr. Andres Esperitu, the parish priest of Barangay San Joaquin, said Fr. Patrick’s decision to stay in Sierra Leone exemplified the real life of a missionary—“without any consideration, without fear and willing to shed his blood, as Jesus did, for the sake of the people.”

“I really appreciate and salute Fr. Patrick for his decision and for what he did,” Fr. Andres Esperitu said.

In an interview with the Inquirer, the 33-year-old missionary priest from Calbayog admitted he was afraid of the virus.

“Yes, I admit I am afraid—who is not afraid of this virus? But I don’t allow the fear to control me. Yes, Ebola is a deadly virus but there are ways that you can protect yourself from it. I came to Sierra Leone to serve,” he said.

To protect himselg, according to the priest, he practices what he called “the ABC of Ebola — Avoid Body Contact.”

He said he has had to stop shaking of hands, hugging people, and during communion, he makes the people take the wafers by hand. He also washes his hands after visiting people under quarantine.

Every day he and a companion priest visit people in quarantine and give them food and other supplies.

The missionary said that in their parish, the St. Conforti parish in Madina, 50 people had died from Ebola and only two of those stricken had survived. As of Oct. 31, 1,064 people had died of Ebola in Sierra Leone.

Asked what he would do if he got sick, the Xavieran missionary repliued: “I hope not, but if I will contract the disease I will embrace it. If I will have Ebola I will embrace it peacefully.”

And he would not want to be brought home to the Philippines or any other country for treatment. He stay to be treated in Sierra Leone.

And it had nothing to do with wanting to be a martyr. “No. I just want to be with my people, I am a priest,” he said. “My presence here will not cure those people who have Ebola. My presence here will not make dead … alive again. My reason for remaining here in Sierra Leone is to be with our people, to continue to give them hope, and to assure them that their fears and tears are just ephemeral. Ebola will come to an end, soon.”

He thanked his family for their support and for loving him, saying because of their love he was able to love other people.

He asked his family to pray for him and light a candle for him in front of an image to Sr. San Joaquin, their village’s patron saint.

Fr. Patrick asked the world to pray for the people in West Africa. “We are people, we are not virus,” he said.

Quarantine on island for Filipino peacekeepers from Liberia