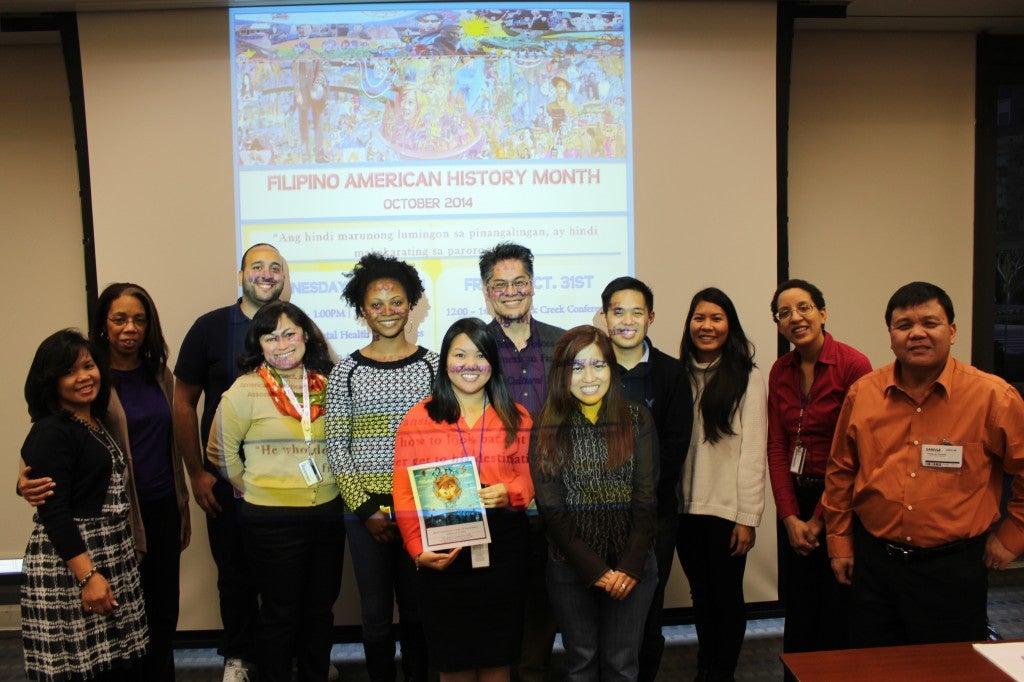 It’s a standard fare that allows the sponsoring agency opportunities to promote greater appreciation of diversity in the workplace. To Filipino Americans employed at these offices, the month-long celebration allows them as well to call attention to their presence in this country.

This year, one agency did something different.

Citing alarming statistics of depression and suicide ideation among Filipinos, the Substance Abuse and Mental Health Services Administration (SAMHSA) focused on the impact of culture on behavioral disorders.

As a culminating program for Filipino American History Month, SAMHSA convened during the last week of October a “Filipino American Behavioral Health Webinar,” which was co-sponsored by the White House Initiative on Asian and American Pacific Islanders (WHIAAPI).

That same week, SAMHSA also showed a documentary film about intergenerational conflicts in the Filipino American family – an “area of stress in the process of acculturation.”

According to Filipino American psychologists Patricia Heras and Judy Patacsil who collaborated on the project, “Silent Sacrifices: Voices of the Filipino American Family,” is designed to help parents and their children build their skills for enhancing family communication.

SAMHSA staff and employees and members of the Filipino American community viewed the film at the agency’s office in Rockville, Maryland. A lively discussion followed, with employees from different cultures relating their own “growing up” experiences in America.

“I’ve talked to community and student leaders and I can sense they have a passion to learn about these ‘taboo’ topics,” says Krystle Canare, who started working at SAMHSA’s Office of Behavioral Health Equity two months ago. “What they need, however, are experts and mentors in the field to educate and empower them to also take a stance.”

Canare, who just graduated with a public health administration degree from the University of Maryland, attended a community forum last year, which she describes as “an eye-opener.”

Called “Depression: Beyond the Blues,” it was organized by community leaders in the Washington, DC area in response to the shooting death of a young Filipino mother who was apparently suffering from depression. News of two Filipino teachers and a teenager committing suicides in recent years have also raised concerns among community leaders. 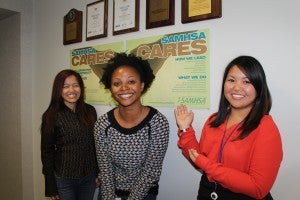 Despite being new on the job, Canare was able to convince her supervisor, Roslyn H. Moore, to sponsor both events. A Public Health Analyst at SAMHSA, Moore welcomed the opportunity.

She agrees with major concerns raised by mental health practitioners that the lack of research on the problems facing Filipino Americans impacts the development of programs and services relevant to them.

“Krystle has been a catalyst in our department in the two months she has been with us,” Moore said admiringly. “Because of her advocacy and passion, SAMHSA is given this opportunity to focus on some critical issues facing the Filipino American community. And we’re doing it to honor Filipino American History Month, which is a first in this agency’s history.”

At the hour-long webinar on October 29, close to a hundred participants across the country dialed in. In his opening remarks, WHIAAPI Senior Advisor Jason Tengco talked about “having lost loved ones to suicide” and the need to “push back on the hiya,” a Filipino term which literally means “shame.” Tengco was referring to the stigma associated with mental illness.

“Mental health concerns are not prominently or routinely addressed in AAPI communities,” added Tengco. “However, these issues are primary contributors to overall health and well-being. Although the prevalence rates for mental health conditions are generally the same for AAPIs compared to the general population, the burden is often greater for our community due to limited access and engagement in mental health services, lower rates of treatment and poorer quality care leading to worse outcomes.”

David provided a context for the Filipino American psychological experience by citing the “insidious effects of colonialism” and the damaging consequences of “internalized oppression” to self-esteem and the core value of “Kapwa,” (shared inner self).

“This value allows us to recognize that one shares an identity with others and that one is not and should not be separated from others,” David said. “The loss of kapwa is related to depression, substance abuse and suicide ideation.”

David called on participants to acknowledge and pay close attention to the effects of colonialism and not succumb to the “Model Minority Myth.” Many Filipino Americans are struggling economically, he said, “even if they are smiling and they say they’re OK.” On “decolonization,” David cited the scholarly work of Sonoma University Professor Leny Mendoza Strobel in enhancing a sense of pride among Filipino American youth by “recovering their indigenous consciousness.”

Nadal expanded on David’s points by noting that Filipino Americans may suffer from a “Smiling Depression,” in which they do not exhibit external symptoms, like difficulty eating and sleeping, but repress or hide internal symptoms, such as sadness and worthlessness.

“What can we do?” Nadal stressed the need to address on the individual level mental health stigma in families, including coping and gender roles. “We have to talk about seeking mental health assistance like going to the dentist,” he said. “There should be no shame about getting treatment for depression.”

He added: “We also need to engage our young people and talk to them about political issues and how they relate to mental health. Always have mental health in the back of your heads, not as an afterthought. Let’s integrate it in our discussion of domestic violence, discrimination and even immigration, especially as it affects the undocumented. Let’s make mental health part of our ordinary life so it’s taken seriously.”

Canare, who serves as youth coordinator of the Philippine American Foundation for Charities (PAFC), intends to do just that by using her position, and passion, to engage leaders of student organizations in the area. She hopes to “keep the conversation going in the community so we can heighten awareness about mental health issues until they will no longer be considered taboo.”

How to spot if your teenager is depressed