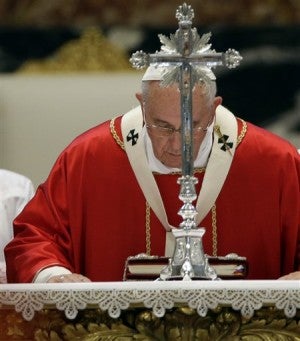 Pope Francis celebrates a Mass for cardinals and bishops who died in the past year, in St. Peter’s Basilica at the Vatican, Monday, Nov. 3, 2014. AP

MANILA, Philippines–As expected, 99 percent of some 1,200 Catholics from Metro Manila and four neighboring provinces areas expressed “positive sentiments” about Pope Francis’ scheduled state and pastoral visit to the Philippines next January in a recent survey conducted by the Church-run Radio Veritas.

In the “Veritas Truth Survey,” conducted during the third quarter of the year, 504 or 42 percent of respondents said they were “happy about the Holy Father’s visit to the country” from Jan. 15 to 19.

Two hundred and forty, or 20 percent of respondents said they felt “blessed” while another 20 percent said they were “overwhelmed.”

Seventeen percent, or 204 people, said they were “excited” while only 12, or a low one percent did not have any reaction towards the Pope’s visit.

Asked about the perceived social impact of the trip, 35 percent of respondents expressed confidence it would further strengthen the Roman Catholic religion in the country.

Others responded that the visit would likely result in stronger ties between the Vatican and the Catholic church in the Philippines (33 percent); bring the Filipino youth closer to the Catholic church (14 percent); improve Church-state relations (8 percent); give importance to Church teachings about social issues (5 percent); encourage more Catholics to join the “religious life,” (4 percent); and help improve the country’s tourism industry, 1 percent.

Asked what social issues they wanted Pope Francis to take up during his trip, 26 percent of respondents answered “spiritual,” followed by family-related topics like divorce and gay marriage, among others (24 percent); youth-related issues like sex education, child labor and out-of-school youth (20 percent); health-related topics, including abortion, contraceptives and the controversial RH Law (10 percent); political issues like separation of Church and state, graft and corruption and freedom of information (9 percent); economic issues like land reform and oil deregulation, (5 percent); and environmental topics, including calls for a total ban on logging and mining, 3 percent.

In a statement, Radio Veritas said “the Holy Father’s visit is thus perceived as an opportunity to bring forth a sense of spiritual renewal among those surveyed in this study, which is a public affirmation of Pope Francis’ thrust of conveying a healing presence in the “Mercy and Compassion” theme of his visit.”

Fr. Anton Pascual, RV president, told reporters it was not surprising that the whole world has been “excited about meeting the healing Pope” in person.

“He doesn’t judge, discriminate against or condemn people … We can see and feel the healing presence of God in the person of Pope Francis,” he noted.

Pascual, also executive director of the Church-attached charity group Caritas Manila, described the Pope’s trip to the Philippines as a “perfect expression of evangelization.”

The Catholic Church, he noted, has gone “in a new evangelization mode, a new expression method to spread the love of Jesus Christ, as well as mercy and compassion to bring God closer to the people.”

According to Pascual, their Truth Survey about the papal visit was the “first of its kind.”

In conducting the survey, the social communications arm of the Catholic Church gathered data “through a stratified random sampling design with a plus and minus 3 percent margin of error.”

But Radio Veritas has been considering conducting similar surveys on various issues facing the nation, including graft and corruption in government, disclosed Pascual.