No Filipino involved in double murder case in Hong Kong—DFA 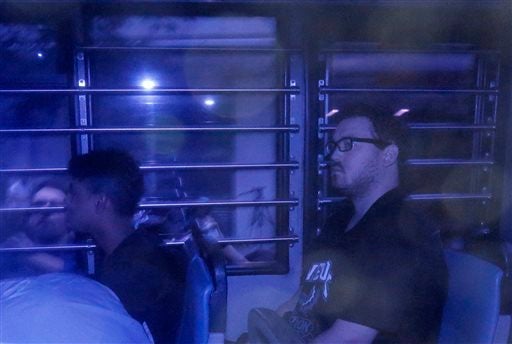 Rurik George Caton Jutting, 29, right, is escorted by police officers in an police van after his appearing in a court in Hong Kong Monday, Nov. 3, 2014. AP

MANILA, Philippines — The Department of Foreign Affairs (DFA) clarified Monday that no Filipino was killed in the recent double murder case of two sex workers in Hong Kong, contrary to an earlier report by a British media outlet.

“The Philippine Consulate General in Hong Kong, upon verification with the Wan Chai Police, has received preliminary information that no Filipino national was involved in the double murder case that was first reported in the media on November 1, 2014,” the Hong Kong Consul General said in a statement.

British news outlet The Telegraph said in a report on November 2 that a UK national identified as Rurik George Jutting, 29, was suspected of killing a 25-year-old Indonesian and a 30-year-old from the Philippines.

“The Filipina victim had sustained multiple stab wounds and was found lying on the floor inside the £3,000-a-month flat,” the report said.

DFA spokesman Charles Jose said that it was clear the police have ascertained the nationality of both victims and that none were Filipino.