Sueselbeck leaves, says sorry for ‘not being aware of political part’ of Laude slay

MANILA, Philippines – The German fiance of slain Filipino transgender Jeffrey “Jennifer” Laude left the Philippines on Saturday  but not before apologizing to the Filipinos and for “not being aware of the political part” of the crime that was committed against Laude.

“If any Philippine person felt disrespected with what I did, I first want to apologize to all Philippine people. I always respected you. I want to say sorry to you all,” said Marc Sueselbeck who left aboard a China Airlines flight at 4:45 p.m. from Terminal 1 of the Ninoy Aquino International Airport.

Sueselbeck agreed to voluntarily leave the country instead of being deported by the Bureau of Immigration after he incurred the ire of the military when he jumped over the perimeter fence of its headquarters in Camp Aguinaldo where Private First Class Joseph Scott Pemberton, the suspect in Laude’s killing, was being detained.

“Thank you that you allow me to leave. It was my intention already last week. But you know I think you did show up the point that you wanted to mention that no one gets away with it. I think I didn’t get away with it,” he said.

Although Pemberton is detained inside a container van at Camp Aguinaldo, he remains under US custody by virtue of a provision in the Visiting Forces Agreement (VFA) between the US and the Philippines that places erring American personnel under US jurisdiction until the completion of local judicial proceedings. 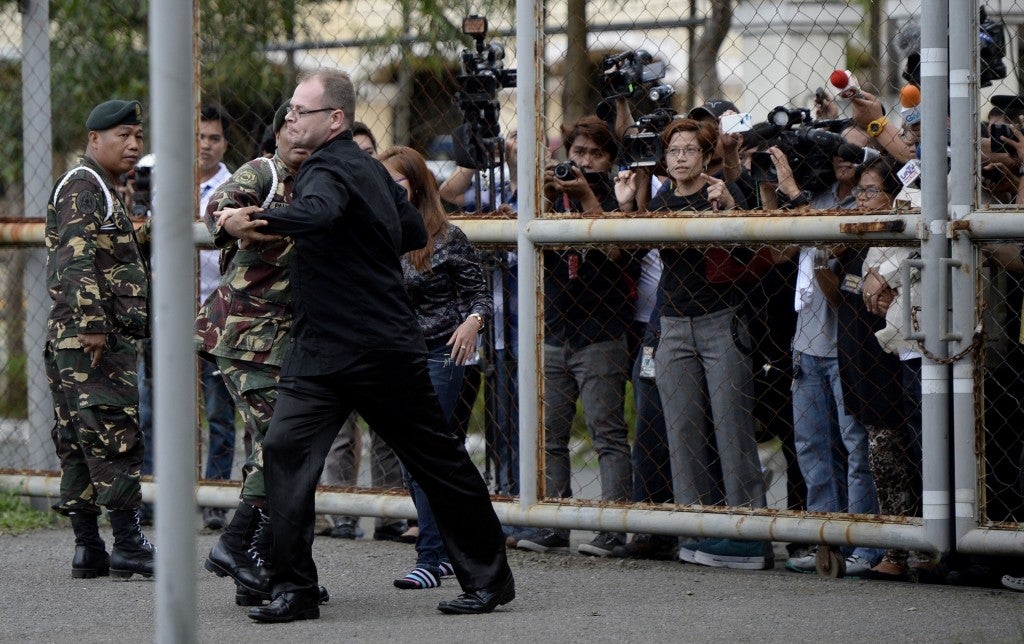 Sueselbeck was supposed to leave the country on October 26 but was prevented from doing so because of a deportation case stemming from a complaint filed by the military, which was later dropped for “humanitarian considerations”.

Sueselbeck said he wanted to return to monitor Laude’s case.

His lawyer, Virgie Suarez, said they would “file the necessary petition as soon as possible” to lift the ban against Sueselbeck.