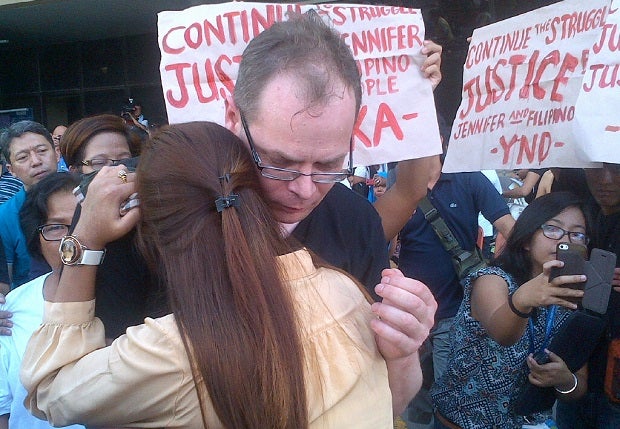 Marc Sueselbeck, fiance of slain Filipino transgender Jeffrey “Jennifer” Laude, hugs Laude’s sister Marilou, before leaving for Germany at the Ninoy Aquino International Airport (NAIA) Terminal 1 Saturday, Nov. 1, 2014. Sueselbeck agreed to leave voluntarily following a deportation case filed against him by the Bureau of Immigration for jumping over a fence of the military headquarters in Camp Aguinaldo in Quezon City where Private First Class Joseph Scott Pemberton, the main suspect in Laude’s killing, was being detained. NESTOR CORRALES/INQUIRER.net

Marc Sueselbeck will fly out at past 4 p.m. via China Airlines.

Sueselbeck will return to his hometown in Frankurt, Germany after the Bureau of Immigration granted his request for voluntary deportation.

Speaking to reporters, lawyer Virgie Suarez, legal counsel of the Laude family, said Suesebeck would be blacklisted as an “automatic effect of his voluntary deportation”.

She, however, said Sueselbeck could always request that he be delisted so that he could return to the country to monitor the judicial proceedings on Laude’s case.

“Of course Marc would always want to see how the trial is going on. So we will file the necessary petition as soon as possible,” she said.

Sueselbeck was escorted by police from the Bureau of Jail Management and Penology (BJMP) in Taguig City where he was detained.

Suarez said this was “part of the procedure of voluntary deportation.

On October 26, Sueselbeck was set to leave the country but was barred by BI officials pending his deportation case.

“This whole thing is just to satisfy the whims and caprices of this government,” she said.

Sueselbeck’s run-in with the government stemmed from his attempt to get through to Private First Class Joseph Scott Pemberton, the suspect in Laude’s killing, by jumping over the fence of the military’s national headquarters in Camp Aguinaldo where Pemberton was brought from the USS Peleliu.

Sueselbeck and Laude’s sister Marilou were prevented by local guards, one of who was shoved by the German in his attempt to reach the container van where Pemberton was being detained.

The military filed a complaint against Sueselbeck but later dropped it although the deportation case stayed.

Laude was found dead in a motel in Olongapo City last October 11.

On Oct. 13, the police and a member of the US Naval Criminal Investigative Service ascertained Pemberton’s identity after several witnesses, including Laude’s friend “Barbie,” picked out his picture during a “photo-lineup process”.

Marc Sueselbeck: A big ‘price to pay’ for ‘losing control’ over Pemberton