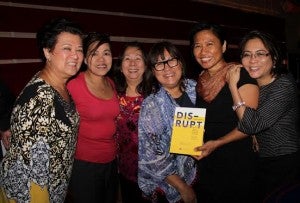 WASHINGTON, DC — Gloria T. Caoile was 17 years old when she arrived in the US, literally fresh off the boat. “Naïve and inexperienced,” she took low-paying clerical jobs without health benefits and endured harassment and discrimination from “predators of all kinds” because she was a Filipina and a woman.

Returning to work one day after giving birth, she was denied a pay increase and made to feel that motherhood was an impediment to job performance.

But rather than suffer in silence, her “sense of vulnerability” spurred her to fight for workers’ rights “because I do not want anyone to ever experience what happened to me.”

Years later, she held a top position of authority in the largest public sector labor union in the country, culminating in President Bill Clinton publicly honoring her for “a lifetime of work and service.”

Caoile’s story is just one of the personal accounts in DISRUPT: Proud. Loud. Leading Without a Doubt, a collection of stories by 35 women who overcame “seemingly insurmountable barriers” and “complex and personal and professional challenges.”

In this book, these successful Filipina women talk about the meaning of their leadership experience as they navigated the corporate cultures in the global workplace.

Shirley S. Raguindin grew up poor in Hawaii’s plantations. After graduating from high school, her mother told her that “women like you would be great spouses, with kids.” But she had dreams. Like going to the Air Force Academy. She was kicked out of the house for defying her parents.

Today, Colonel Raguindin is Chief Diversity Officer of the Air National Guard, an adviser to three-star and foour-star generals who are responsible for the military readiness of 485,000

“Beating the odds is not about poor conditions but about mindsets,” she says. “The only barriers to goals in life are not the ones created by others, but the ones we create in ourselves.”

Their book reading was held at the AFL-CIO national headquarters and sponsored by the San Francisco-based Filipina Women’s Network (FWN), which published earlier this year its first of a series of leadership books.

Maria Africa Beebe, the book’s chief editor, who also shared her own story, noted that “when you google Filipinas on the web, all you get are links to mail order brides, domestics and dating sites.”

“There is zero literature on Filipina women’s leadership, except on Cory Aquino. That’s why we came up with a book about our leadership journey as women, the values we brought from the Philippines and leadership tips we can pass on to the younger generation,” Beebe explained.

FWN Founder and CEO Marily Mondejar, who introduced the panel, recounted how in its last 11 years, FWN has honored and recognized hundreds of Filipina women global leaders, influencers, thinkers and public figures. “Our mission is to see a Filipina leader in every sector of the economy by the year 2020,” she says.

“We want to inspire Filipina women, assure them they have the capacity to lead, that they are the ultimate disrupters. They disrupted their lives, families and careers when they left their home country to immigrate to foreign lands and re-invent their lives,” Mondejar added.

Caoile, who traveled across the Pacific on an ocean liner, left her family behind in the Philippines as a teenager. She enrolled in a secretarial school and worked her way to a position of authority and power for more than 30 years.

“All I knew from the beginning was to make something of myself and not let my parents down, especially after their efforts and sacrifices to give my siblings and I a better future,” she said, holding back tears. 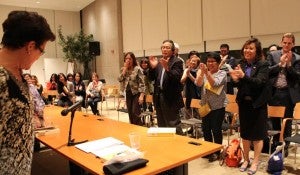 Gloria T. Caoile receives a standing ovation after reading excerpts from “Stepping Up.” Col. Shirley Raguindin reads excerpts from “Beating the Odds,” a chapter in the book Disrupt. Proud. Loud. Leading Without A Doubt, while Gloria Caoile and Marily Mondejar look on.

“But my journey took me in front of 8,000 people, being complimented by the President of the United States for a lifetime of work and service. At that moment, I knew I had kept my promise to my mother. I did not let her down.”

After retiring from the American Federation of State, County & Municipal Employees (AFSCME) more than 10 years ago, Caoile continues to be an advocate for civic engagement, workers’ rights and social justice.

“Our mantra is no longer ‘you’ve come a long way, baby,” she said. “That was yesterday. Today we are loud, proud and we lead without a doubt.”

She also reminded everyone to vote in the coming elections. “We need to participate in the political process because we can bring our Filipino American values to the table and influence the direction and future of this country. Sisters, we need to step up, and power up!”

After the book reading, the speakers joined White House Executive Chef Cristeta Comerford, who also wrote a chapter (“Chef to the Chiefs”), at a small gathering with friends near the President’s residence. She is the first female and ethnic minority to earn this prestigious title.

The book, now on a national tour, was launched in October at the 11th Filipina Leadership Global Summit in Manila.

Read Next
The life and times of an absentee mother
EDITORS' PICK
DOH warns vs eating raw meat, exotic animals amid coronavirus outbreak
In appreciation: Kobe Bryant, a life defined by hard work
SM continues to send relief assistance to remote towns in Batangas
Get exciting deals and discounts when you download the new McDonald’s App
‘House of Kobe’ launched in Valenzuela City hours before hoops star’s death
4 Ways Jollibee’s new store will serve a leveled-up kind of joy to Filipinos in the South
MOST READ
College baseball coach, wife and daughter die in crash that killed Kobe
3 Chinese admitted to San Lazaro Hospital after showing signs of flu
Lack of witnesses prompts Makati Court to reset Trillanes’ rebellion trial anew
Kobe Bryant’s helicopter flew in fog that grounded other choppers
Don't miss out on the latest news and information.