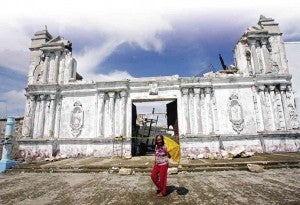 MANILA, Philippines–The United States embassy has donated $300,000 for the reconstruction of the centuries-old Church of the Immaculate Conception in Guiuan, Eastern Samar, destroyed nearly a year ago by Super Typhoon Yolanda (international name: Haiyan).

“Historic landmarks like this are important to the community. The US Embassy believes it is important to preserve cultural sites for future generations to enjoy,” said US Ambassador to the Philippines Philip Goldberg said in a statement Thursday.

The grant comes from the US Ambassadors Fund for Cultural Preservation (AFCP) and will be implemented through a partnership between the US Embassy and the National Museum of the Philippines.

Construction on the Church of the Immaculate Conception began in 1596 and was completed in 1768. It is the only shell-decorated church in the world, the US Embassy said in the statement.

“The AFCP supports the preservation of cultural sites, cultural objects and forms of traditional cultural expression in more than 100 developing countries around the world,” the embassy said.

“AFCP-supported projects include the restoration of ancient and historic buildings, assessment and conservation of rare manuscripts and museum collections, preservation and protection of important archaeological sites and the documentation of vanishing traditional craft techniques and indigenous languages,” it said.