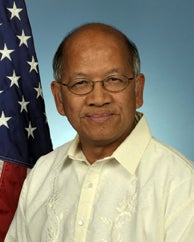 SUISUN CITY, California — Pete Sanchez, the Filipino American mayor of this city in the San Francisco Bay Area, is an unusually unassuming, relaxed – humorous if you will — figure in local politics.
“Residents of most cities think that City Hall politicians don’t listen to the people,” he said. “But the people of Suisun know that I’m not that type; they can come in and see me any time – without an appointment. I’m very casual. I often come to office just wearing a t-shirt.”
Then he goes on to narrate a little anecdote that shows how pleasantly playful and friendly he can get: “One day, a man came to City Hall, walked up to me, and asked for an appointment to see the mayor. I made one for him right away. When he walked into the Mayor’s office, he was surprised and was laughing to see that it was me.”

It’s the same casual demeanor that Pete Sanchez takes to his campaign trail, partly, too, because he is running unopposed. He even uses old election signs.

“When I ran for mayor in 2006, I used my old signs from my vice mayor re-election campaign years earlier. People laughed when they saw ‘Re-elect for Vice Mayor’ on the signs for my mayoral campaign,” he mused.

This is not to say Pete is not taking his political career seriously. In fact, he has his eyes set on a seat with the Solano County Board of Supervisors. But, he pointed out that he would run only if one of the incumbents, Supervisor Jim Spering, former Suisun City mayor, did not run for re-election.

“Jim is a long-time friend,” Pete explained to FilAm Star. “I am in politics because of him. I was elected to the Suisun city Council in 1995. After my wife passed away in 1997, I didn’t want to run for office again, but Jim, who was then mayor, wanted me to run because, he said, I’m an accountant and therefore useful to the administration. He raised campaign funds for me and even designed my campaign signs. When he decided to run for re-election as County Supervisor this coming election, I kept his promise to stay out of that race and chose instead to stand for re-election as Suisun City mayor.”

Pete has nothing but praises for Spering. “Suisun was on the ‘Worst Cities To Live In’ list back in the 1980s,” he recalls. “So Jim obtained a $60 million loan and renovated the city. He bulldozed the old apartments and built Victorian homes and the Marina commercial center. We brought in Walmart, which has been a great benefit to the City. We have a budget of $11 million a year, and Walmart brings in one million in sales and property taxes.

According to Pete, the unions did not like the presence of Walmart very much, and some people tried to recall Spering over that issue, but were not able to gather enough signatures.
“I’m an accountant. I like it when my opponents don’t know how to count,” Pete laughed.

Pete is also proud of the Salvation Army’s ‘Kroc Corps Community Center’ presence in Suisun. “There are only 11 in the whole country, and this is probably the last one. So I’m honored that they chose to build it in Suisun. It’s a 22-million dollar building,” he emphasized.

Perhaps even without Spering, however, Pete would still find himself serving the people thru politics. “It’s in my blood,” he declared. “I came from a family whose members served the people at one time or another. My grandfather, for instance, was a city councilor in the Philippines.”

And so, the nagging question remains: Will he run for re-election again when his next term expires four years from now?

“Being in the city council, and mayor at that, is a very rewarding experience because you can prioritize the things that people need, and respond to them,” he quipped. “But four years from now, I’ll be 68 and in politics, sometimes, age counts because you need energy to be able to serve. Right now, I’m in the peak of health, so we’ll see.”

Read Next
AARP presents award for senior welfare, advocacy at TOFA-New York
EDITORS' PICK
LTO’s P500-M deal for screws draws scrutiny
Smart reinforces superiority with best speed and mobile video experience in PH
Every Filipino home can now be a smart home with realme TechLife
Nestlé Philippines’ ‘NESCAFÉ Plan’ bags Grand Anvil at PRSP 56th Anvil Awards
New 3,045 COVID-19 cases push PH total active cases to 40,074
How to lose a PH genius: Wesley So officially a US citizen
MOST READ
US lays out list of aid to ‘satisfy’ Duterte following VFA payment demand
Robredo on Sara Duterte leading poll surveys: Why are Filipinos drawn to leadership of this kind?
How to lose a Filipino genius: Wesley So officially a US citizen
Lawyer for red-tagged tribal folk stabbed; laptop, documents taken
Don't miss out on the latest news and information.