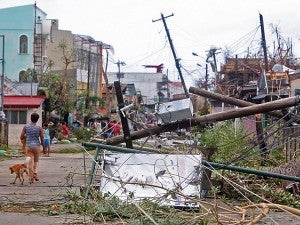 The street leading to the municipal hall of Daanbantayan in the nothern Cebu after the super typhoon Yolanda. CDN FILE PHOTO/TONEE DESPOJO

MANILA, Philippines — At least 800,000 survivors of Super Typhoon “Yolanda” (Haiyan) may have suffered from different levels of mental health problems, according to the World Health Organization (WHO).

“As many as 800,000 people among the displaced population could suffer from common or serious mental health disorders,” said Dr. Julie Hall, WHO country representative in the Philippines, in a news conference for the first anniversary of Yolanda, the world’s strongest typhoon in recent history.

Of the estimated 800,000 survivors, at least one in 10, or 80,000, have been seen advancing into depression and would need treatment and more medical support, she added.

And as the country prepares for the commemoration of All Souls Day, there is a possibility that the survivors may again experience depression and other mental health problems as they remember their dead, according to the WHO official.

“A lot of grief and depression may come back with the commemoration of the day of the dead. More people will probably be in need of mental health support,” said Hall.

The reappearance of reaction to the storm is common, according to Hall.

“Recurring emotional reactions … reminders such as rain can trigger upsetting memories of the critical incident,” said the WHO.

“These ‘triggers’ may be accompanied by fears that the stressful event will be repeated,” the WHO said.

There are only about 70 trained health professionals and almost 300 community workers attending to mental health problems in areas devastated by Yolanda, according to Hall.

WHO reported that after its immediate response to the typhoon, it began its work to promote the integration of mental health skills into the primary health care system.

“WHO is training a large (group) of health professionals in identification, treatment and support of people with mental health problems to improve their mental health status,” it said.

It added that it has been working with the Department of Health to provide basic training for psychosocial care for community workers on how to diagnose and manage common and serious mental health disorders.

Also, the WHO said it has been working with the Philippine Department of Health to increase the capacity of hospitals and other healthcare facilities in terms of treating mental health patients.

With the country commemorating the one year anniversary of the disaster on Nov. 8, Hall said the international organization would continue to support communities that have been devastated to help people there recover.

“We are grateful to all the donors who have funded our work,” Hall said, adding that the WHO received $17 million in donations.

“Together we aim to bring back a better, more resilient health system for the future. Together we are putting health at the heart of healing,” Hall said.

Yolanda is ‘most powerful typhoon for 2013’—weather experts

Glimpses of devastation a day after ‘Yolanda’