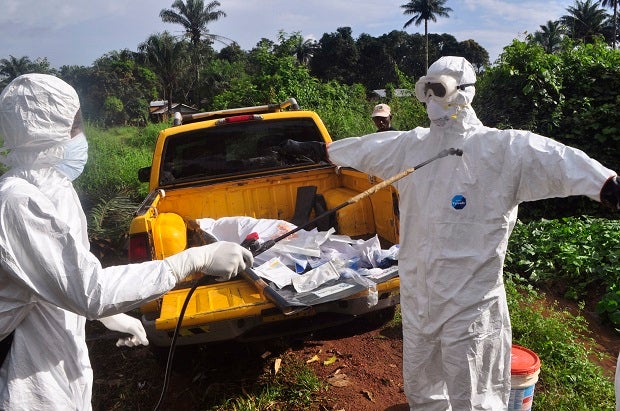 A health worker sprays disinfectant onto a college after they worked with the body of a man, suspected of contracting and dying form the Ebola virus on the outskirts of Monrovia, Liberia, Monday, Oct. 27, 2014. The United States will help fight Ebola over “the long haul,” the American ambassador to the United Nations said on a trip to the West African countries hit by the outbreak. AP

Jim Yong Kim said Tuesday that he is worried about where those health care workers can be found given the widespread fear of Ebola. The World Bank president spoke alongside UN Secretary-General Ban Ki-moon and African Union Chairwoman Nkosazana Dlamini-Zuma.

Ban said the transmission of the virus continues to outpace the international community’s response. He appealed to African Union’s 54 member states not to impose Ebola-related travel restrictions or close their borders.

Dlamini-Zuma said African Union states have pledged to send more than 2,000 health care workers to West Africa. She did not say when the workers would arrive.