Marc Sueselbeck: A ‘big price to pay’ for ‘losing control’ over Pemberton 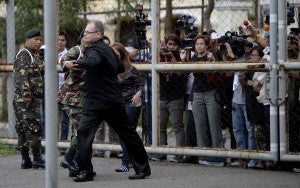 MANILA, Philippines – For “losing control” that lasted all of two seconds, Marc Sueselbeck, the fiance of slain transgender woman Jeffrey “Jennifer” Laude, said Tuesday that he “paid a big price” for the possibility that he could be meted a lifetime ban from the Philippines.

“For that two seconds of losing control, I personally apologized right after,” Sueselbeck told a forum at the University of the Philippines, referring to his act of shoving a Filipino guard inside Camp Aguinaldo in Quezon City after climbing over the perimeter fence to get to the detention facility where Private First Class Joseph Scott Pemberton, the suspect in the killing of Laude, was being held.

Following his transfer from the USS Peleliu, Pemberton has neither been seen by the Laude family, Sueselbeck, nor the Olongapo prosecutor.

For the shoving incident, Sueselbeck was declared an “undesirable alien” by the Bureau of Immigration and was barred from leaving the country last Sunday pending results of an ongoing investigation for his misbehavior last week. He faces deportation and a lifetime ban.

He described such a ban as a “life sentence” which would also adversely affect the Laude family as well as the memory of Jennifer because he would not be able to visit her grave anymore.

“If they want to punish me, punish me personally. It was my personal mistake and I did everything to make up for it. It was not a crime, it was a very stupid thing and I have showed my regret,” he said.

“I never had any bad record. I am a foreigner standing up for a discriminated group in the Philippines,” Sueselbeck said.