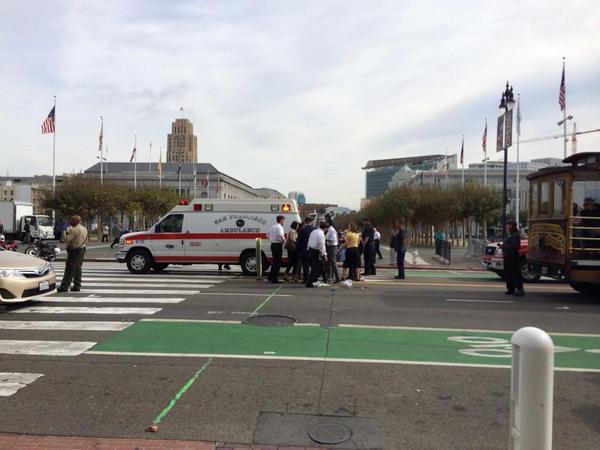 Priscilla Moreto was killed in this cross walk in front of City Hall in San Francisco.

SAN FRANCISCO – A tourist bus struck and killed a Filipino employee at City Hall while she was crossing a pedestrian lane at the Civic Center Plaza on October 23.

Priscilla “Precy” Moreto, 67, became the latest victim of pedestrian traffic accident in San Francisco at around 11 a.m. She was killed in a cross walk in front of the San Francisco City after being struck by a tourist bus traveling at five miles an hour.

The tour bus driver said he did not see anyone in the cross walk. Tourists on board his bus also said they did not see the pedestrian get run over because they were focused on looking up at City Hall.

The National Federation of Filipino American Associations decried the accident, writing a letter to the Board of Supervisors to stop “multi-tasking” bus drivers who also act as tour guides while their vehicles are in motion.

These drivers “get distracted and pose a grave danger to seniors and small children who are often hard to see,” said the NAFFAA letter signed by the organization’s San Francisco Chair Rudy Asercion.

“In this connection we urge you to prohibit tour bus drivers from acting also as tour guides while actively driving tour buses in the city and county of San Francisco. Please make it a requirement for Tourist Bus owners to employ a tour guide separately from the bus driver,” the letter stated.