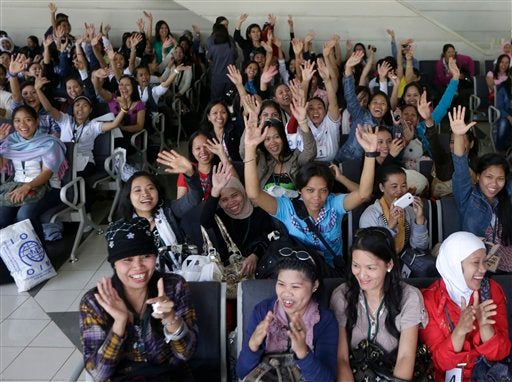 MANILA, Philippines–The Philippines remained the top performer in the Asia-Pacific in terms of gender equality, even as the country fell four notches to rank ninth out of the 142 economies assessed in the Global Gender Gap 2014 report.

Last year, the Philippines placed fifth in this index by the World Economic Forum, which studies the gap between women and men based on four main indicators: health and survival; educational attainment; economic participation; and political empowerment.

Based on the Global Gender Gap 2014 report, the Philippines was able to maintain its No. 1 ranking in two indicators, namely, education and health, but fell eight notches to rank 24th under the economic participation indicator.

Under politics, the Philippines’ ranking further declined by seven places to 17th of the 142 countries in the index.

The ninth edition of the Global Gender Gap Index aims to understand whether or not countries are distributing their resources and opportunities equitably between women and men, irrespective of their overall income levels, by measuring the gender inequality gap through four indicators.

According to the WEF, Nordic nations remained the most gender-equal societies in the world. Last year’s leading four nations—Iceland, which ranked first globally, Finland (2nd), Norway (3rd) and Sweden (4th)—were joined by Denmark, which climbed to the fifth from last year’s eighth place.

There is considerable movement in the top 10, with Nicaragua climbing four places to sixth, Rwanda entering the index for the first time at seventh, Ireland falling to eighth, the Philippines declining four places to ninth, and Belgium climbing one place to tenth.

The United States rose three places to rank 20th in 2014, after narrowing its wage gap and improving the number of women in parliamentary and ministerial level positions, the WEF said.

According to the WEF, in its nine years of measuring the global gender gap, the world has seen only a small improvement in equality for women in the workplace.

Gender gap for economic participation and opportunity now stood at 60 percent from 56 percent in 2006 when the WEF first started measuring it. Based on this trajectory, with all else remaining equal, it will take 81 years for the world to close this gap completely, it said.

The report further showed that the gender gap is narrowest in terms of health and survival at 96 percent globally, with 35 countries having closed the gap entirely. This included three countries that have closed the gap in the past 12 months.

The educational attainment gap is the next narrowest, standing at 94 percent globally, wherein 25 countries were reported to have closed the gap entirely.

While the gender gap for economic participation and opportunity lags behind, the gap for the fourth pillar of equality measured—political empowerment—remains wider still, standing at just 21 percent, even as this area has seen the most improvement since 2006.