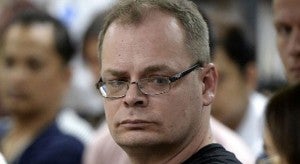 De Lima also said Marc Sueselbeck was stopped from leaving so he could face “undesirability” charges that the Bureau of Immigration had filed against him.

The charges could lead to Sueselbeck’s deportation and being blacklisted in the Philippines, De Lima said.

Sueselbeck missed his Malaysian Airlines flight Sunday night after immigration agents stopped him from boarding it and handed him a copy of a complaint brought against him by the Armed Forces of the Philippines (AFP).

The military filed a complaint against Sueselbeck in the immigration bureau last week, accusing the German accountant of illegally entering an off-limits area in Camp Aguinaldo and assaulting a Filipino soldier.

The trespassing and assault happened on Oct. 22 after the suspect in the killing of Laude, US Marine Pfc. Joseph Scott Pemberton, was transferred from the USS Peleliu, which was docked on Subic Bay, to the Joint US Military Assistance Group (Jusmag) compound in Camp Aguinaldo, the AFP headquarters in Quezon City.

Demanding to see Pemberton, Sueselbeck and Laude’s sister Marilou climbed over the fence and leapt into the Jusmag compound, where the US Marine had been put in a makeshift detention cell–a 28-cubic-meter, air-conditioned freight container.

When challenged, Sueselbeck shoved a Filipino guard but apologized later in talks with camp officials. He and Marilou Laude left the camp without being allowed to see Pemberton.

The military rejected Sueselbeck’s apology and asked the immigration bureau to deport the German and declare him an undesirable alien.

The military honored the soldier assaulted by Sueselbeck, TSgt. Mariano Pamittan, on Monday.

AFP Chief of Staff Gregorio Pio Catapang told reporters that Pamittan was recognized for keeping his cool and good behavior during the confrontation with Sueselbeck.

Talking to reporters on Monday, De Lima defended the immigration agents’ action to stop Sueselbeck from leaving the country.

“If he just left, then there would be no chance for us to determine if he was undesirable or not. Because the effect of undesirability is not only deportation but also being blacklisted,” De Lima said.

De Lima said Sueselbeck must attend deportation proceedings at the immigration bureau. He could not leave the country because immigration authorities confiscated his passport, she said.

De Lima said Sueselbeck could not leave the Philippines on his terms. The government should “dictate” the terms of his departure, she said.

“It’s really just upholding the rule of law, upholding our integrity and pride as a nation,” she said.

If a foreigner violated the law or did something that “displeases the host state, he must be answerable for it,” she said.

“[I]f we just let this pass, then what will prevent others from doing it?” she said.

Sueselbeck talked to reporters at Ninoy Aquino International Airport (NAIA) as he tried to leave on Sunday, repeating his apology to the military.

But De Lima said Sueselbeck’s case was “not just really a matter of apology.”

Sueselbeck’s blood pressure shot up when he learned he could not leave the Philippines. He passed out and was taken to Makati Medical Center.

Asked how long the deportation proceedings would last, De Lima said it would depend on how “cooperative” Sueselbeck would be.

She said Sueselbeck could opt for voluntary deportation, which would speed up the disposition of his case.

Sueselbeck’s blacklisting would depend on the immigration bureau, which would determine the basis for his deportation, De Lima said.

But the board that will hear Sueselbeck’s case will consider mitigating circumstances, such as his public statement apologizing to the military, according to Mison.

“He will be given the opportunity to defend himself from the charges, and to prove that he is not an undesirable alien. I’m sure [the apology] will also be taken into consideration,” he said.

Sueselbeck returned to Olongapo City and joined the Laude family at the preliminary investigation of the murder complaint against Pemberton.

“It wasn’t what I expected,” Sueselbeck told reporters, referring to the government action that left him stranded in the Philippines.

The Laudes and their lawyers said the government appeared to have acted fast to embarrass Sueselbeck.

“Why is the government quickly acting on Marc’s case?” Marilou Laude asked.

“It looks like they are just steering us away from the case of Pemberton. The government is focusing so much on Marc,” she said.

Harry Roque, the Laude’s lead lawyer, said he was dismayed at the way the government treated Sueselbeck.

“Marc didn’t kill anyone. Let’s not treat him as if he had killed someone,” Roque said.

“The Philippine government must run after the foreigner who murdered Jennifer,” he said.

Virgie Suarez, also a lawyer for the Laudes, said the family was saddened at what happened to Sueselbeck and was angered by “what the government did to him.” With reports from Cynthia D. Balana and Nathan Melican in Manila and Allan Macatuno, Inquirer Central Luzon

Should Sueselbeck be blacklisted? Gov’t probe will find out