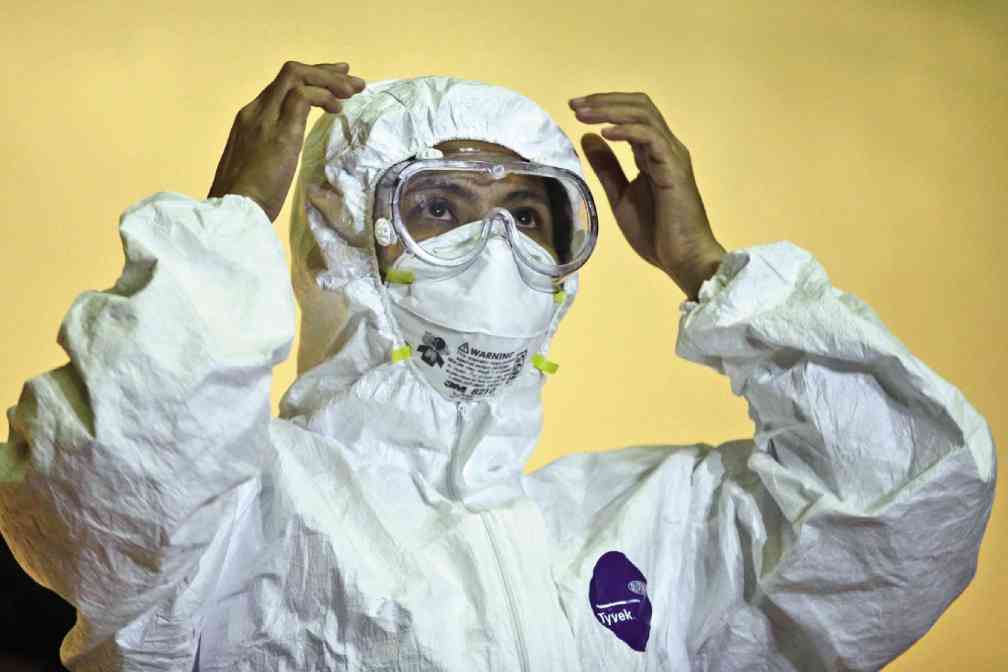 A health worker demonstrates the proper way to wear the protective suit against the Ebola virus during a recent media tour of the Research Institute for Tropical Medicine in Alabang, Muntinlupa City. AP

SINGAPORE—The longer the Ebola outbreak rages in West Africa, the greater chance a traveler infected with the virus touches down in an Asian city, including the Philippines, home to 1,800 Filipinos estimated to be working in the affected area.

How quickly any case is detected—and the measures taken once it is—will determine whether the virus takes hold in a region where billions live in poverty and public health systems are often very weak. Governments are ramping up response plans, stepping up surveillance at airports and considering quarantine measures. Still, health experts in the region’s less-developed countries fear any outbreak would be deadly and hard to contain.

The Philippine government estimates there are up to 1,700 Filipino workers in Liberia, Sierra Leone and Guinea, plus more than 100 peacekeeping troops in Liberia. The Department of Health (DOH) is suggesting a 21-day quarantine period before its citizens leave those three countries, but doesn’t know how it will pay for that, said spokesman Lyndon Lee Suy.

“The DOH is doing its part, but it is downstream, it is on the receiving end,” said Dr. Anthony Leachon, president of the Philippine College of Physicians. “What is important is that Ebola shouldn’t be able to enter. Since we have 10 million migrant workers, we have problems containing that.”

“This is a nontreatable disease with a very high mortality rate. And even a country like the United States has not been able to completely prevent it,” said Yatin Mehta, a critical care specialist at the Medanta Medicity hospital near New Delhi. “The government is trying. They are preparing and they are training, but our record of disaster management has been very poor in the past.”

More than 10,000 people have been infected with Ebola and nearly half of them have died, according to the World Health Organization. The Ebola epidemic in West Africa is the largest ever outbreak of the disease with a rapidly rising death toll in Guinea, Liberia and Sierra Leone. There have also been cases in three other West African countries, Spain and the United States.

Early symptoms of Ebola include fever, headache, body aches, cough, stomach pain, vomiting and diarrhea, and patients aren’t contagious until those begin. The virus requires close contact with body fluids to spread, so healthcare workers and family members caring for loved ones are most at risk.

Asia, home to 60 percent of the world’s population, scores higher than West Africa on most development indexes and includes emerging or developed countries like Singapore, Malaysia, South Korea and Japan. But countries like India, China, the Philippines and Indonesia have vast numbers of poor, many of whom live in crowded slums and underfunded health systems.

Indonesia has put 100 hospitals that have experience of treating patients suffering from bird flu on standby for Ebola, said Tjandra Yoga Aditama, head of the Health Ministry’s research and development board.

The only way of ensuring that the virus doesn’t spread into a country is enforced quarantine for people coming from countries with an outbreak or—even more effective—a total travel ban. But those measures would mean that doctors and other experts trying to beat the virus at its source in West Africa would be less willing or unable to help, making the outbreak worse.

Airports in Asia have stepped up their defenses: screening passengers who have traveled from affected countries, taking any with high temperature for observation and trying to keep contact with them for 21 days—the incubation period. Even assuming these measures are carried out effectively, people can and do lie about their travel history, and common drugs like paracetamol are effective in reducing fever.

There are more than 160 direct flights from Africa to the region’s capital, Guangzhou, a reflection of the booming economic ties between China and Africa. All arrivals are subject to medical observation, which, according to guidelines from the Health Ministry, involves medical staff visiting or calling them morning and evening for 21 days to ask them about their temperature. People whose temperature is above normal should be immediately quarantined for three weeks.

In Hong Kong, around 15 passengers a day arrive from the affected region, chief port health officer Dr. Edwin Tsui Lok-kin said. Prior to the Ebola outbreak, Singapore had an average of about 30 people arriving a month collectively from Guinea, Liberia and Sierra Leone, the government says.

Dale Fisher, the head of the infectious diseases’ division at Singapore National University Hospital, said governments in the region should be educating health workers about the disease and the need to ask anyone presenting with a fever at a medical facility about their travel history.

“Asia is very diverse in its capacity, and there are some countries with people that travel a lot that may not have the best infrastructure and are at greater risk,” said Fisher, who has twice been to Liberia to assist in the WHO’s response. “If an index case arrived back in a large Asian city and they were to sit in an open ward vomiting, then you would have a pretty big job on your hands.”

He said an outbreak could be brought under control with quick isolation and effective tracing of anyone who might have been in contact with the patient, citing the example of Nigeria, Africa’s most populous country. It was declared Ebola-free after confirming 19 cases, seven of them fatal.

Asian health systems and workers have experience in countering infectious diseases, including severe acute respiratory syndrome, or SARS, which first appeared in Hong Kong in 2003, infecting more than 8,000 people and killing about 800. The region grappled a highly pathogenic strain of bird flu around the same time that killed about 800 people in 12 countries, and new strains continue to crop up.

Sujatha Rao, a former Indian health secretary, said India’s health system kicked into overdrive when confronted with a health crisis, as was seen during the 2009 H1N1 pandemic. “In India we’re very good at crisis management, but we are hopeless at routine care,” Rao said.

Asked whether the country was prepared for Ebola, she added: “We are not ready. But that said, there is only so much preparation that any country can do.”

Roxas: Gov’t ready to deal with an Ebola outbreak

Palace to make sure Ebola does not spread in PH