Roxas: Gov’t ready to deal with an Ebola outbreak 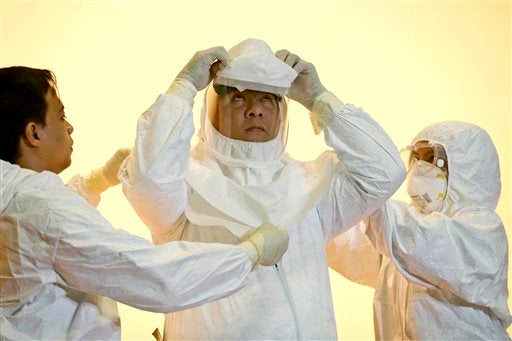 In this Oct. 21, 2014 file photo health workers show the proper way to don an “Ebola suit” during a media tour of the Research Institute for Tropical Medicine facility to show the government’s readiness in dealing with the still Ebola-free country at Alabang, Muntinlupa city, south of Manila, Philippines. AP

MANILA, Philippines — Interior Secretary Manuel Roxas II said on Sunday his agencies have been preparing to help deal with an Ebola outbreak in the Philippines under President Benigno Aquino III’s “whole government approach.”

Roxas said the Department of Interior and Local Governments (DILG) and the Philippine National Police have not been complacent about the Ebola virus outbreak abroad, stressing that 10 million Filipinos have been working in other countries.

“And who knows if someone among them may have, at some point coming home, encountered a carrier?” he said.

The PNP and DILG would carry out contingency plans similar to the preparations for the Middle East Respiratory Syndrome-Corona virus (MERS-CoV) scare a year ago, Roxas said, recalling that at the height of the MERS-CoV scare, the entire government worked together to address the problem.

“It’s not just a health care issue. It was the whole government that successfully addressed that matter,” Roxas said of the DILG and PNP approach to the MERS-CoV scare.

At that time, the police’s role was to “trace the passengers who came home and tested positive for MERS-CoV,” he said. Policemen were also tasked to provide security assistance to health workers bringing patients to hospitals for treatment.

Roxas added that past experiences in dealing with infectious diseases such as MERS-CoV, Severe Acute Respiratory Syndrome (SARS) and bird flu had taught the government prepare contingency measures.

WHO: Number of Ebola-linked cases passes 10000

Palace to make sure Ebola does not spread in PH