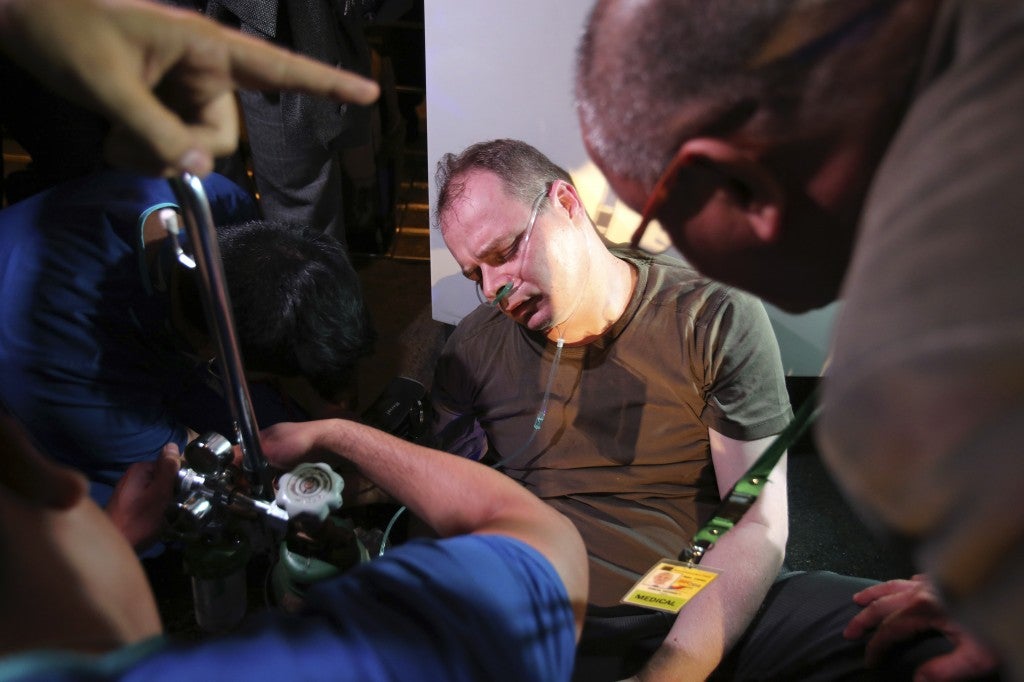 MANILA, Philippines–Marc Sueselbeck, the German fiancé of slain transgender woman Jeffrey “Jennifer” Laude, ended up missing his flight to Germany that was scheduled to leave at 6:30 p.m. Sunday, after he was barred from leaving the country by immigration authorities.

Sueselbeck, who had earlier been charged by the Bureau of Immigration (BI) with being an “undesirable alien,” is now on the bureau’s watchlist, said Justice Secretary Leila de Lima in a phone interview.

The BI is authorized to declare foreigners living in or visiting the country as “undesirable” and order their deportation. The affected foreigner has the right to contest such declaration.

In a text message, Immigration Commissioner Siegfred Mison confirmed that Sueselbeck’s departure was deferred “due to a pending deportation case for undesirability.”

Mison said that a copy of the charge sheet was provided to Sueselbeck and he has been asked to appear at the bureau’s legal department Monday and seek clearance to leave the country.

Sueselbeck was assailed by the Armed Forces of the Philippines after scaling Camp Aguinaldo’s perimeter fence with Laude’s sister Marilou and assaulting a camp guard last Wednesday in an attempt to confront US Marine Pfc. Joseph Scott Pemberton, the suspect in the killing of Laude in an Olongapo City motel on Oct. 11.

Sueselbeck later apologized for his actions, which the AFP accepted, but it was still bent on imposing sanctions and having him deported.

Quoting Mison, De Lima said the BI filed “charges of undesirability” not only against Sueselbeck but also against Pemberton, who is now detained at the military headquarters.

She said Sueselbeck will not be arrested but “will be prevented from leaving on account of such charge.”

“He will likely opt for voluntary deportation. He may leave the Philippines ultimately, either way, but under our own terms,” De Lima said.

De Lima said the BI’s charge was in connection with Sueselbeck’s misbehavior in Camp Aguinaldo where he made an “unauthorized entry” and “physically pushed a uniformed personnel.”

On the charge of undesirability against Pemberton, De Lima said the preliminary investigation in his case would continue.

But lawyer Harry Roque, lead counsel of Laude in the case pending in the Olongapo City Prosecutor’s Office against Pemberton, told the Inquirer in a phone interview that the government was harassing Sueselbeck by preventing his departure from the country.

Roque questioned the authorities’ motive for stopping Sueselbeck from leaving, saying that if the latter was charged with undesirability, he was already facing deportation.

Roque also said Sueselbeck had already apologized to the military for his behavior last week.

“In hindsight, I admit it was a mistake and I hope you understand that what transpired was the frustration, [and the] extremely extraordinary mental pressure we all were in at that point, and fear for Marilou’s sake, aggravated by the insulting manner extended us by the Americans,” Sueselbeck had said.

In a radio interview at the Ninoy Aquino International Airport (Naia) Terminal 1 prior to his planned departure on a Malaysia Airlines flight, Sueselbeck said he regretted his action, noting that it was not his intention to disrespect the Philippine authorities.

He also said he and Laude’s family only went to Camp Aguinaldo to confirm if Pemberton was really there.

“We’d lost a loved one and we felt that we had not received any answer to all the questions that we had consistently raised,” Sueselbeck said on the radio.

Sueselbeck was seen shoving TSgt. Mariano Pamittan, one of the duty soldiers, who tried to stop him from approaching the container van where Pemberton is being held.

He said what drove him to push Pamittan was the sight of Laude’s sister Marilou being pushed backward by camp guards. “It was not an assault,” he said.

“The American soldiers were laughing and I felt so insulted,” he added.

Sueselbeck appealed to the government “to allow me to grieve and visit her grave in the future.”

While he was being interviewed by the media before leaving the airport, Sueselbeck fainted near the exit door of the terminal. He was taken to the medical facility at Naia Terminal 1 but was later transferred to the Makati Medical Center, according to the airport media affairs division.

Meanwhile, the family and lawyers of Laude who earlier attempted to enter a restricted area of the military headquarters might be banned from military camps in the future.

A military official said last week’s incident would be a basis to deny them entry.

“It will be a basis because they already have a record,” AFP public affairs office chief Lt. Col. Harold Cabunoc said on Sunday.

The AFP had condemned in very strong terms Sueselbeck’s trespassing into the restricted area and wanted the German national to be deported and be declared an undesirable alien.

Cabunoc said Laude’s sister, the driver who left his driver’s license at the camp’s gate, and the family’s lawyers, including Roque, “used deception” to enter the camp.

“When they were already inside, they violated regulations by entering an off-limits area… Entry to the camp is a privilege, you can be denied any time,” Cabunoc said.

He stressed that AFP Chief of Staff Gen. Gregorio Pio Catapang Jr. could deny anyone the right to enter the camp through the camp commander.

Cabunoc described Sueselbeck as “rude” and said his group deceived and lied to gain entry into the camp.

“The chief of staff can always deny them entry again, they can deny all of them from any military camp,” he said.

In Sueselbeck’s case, the German national would no longer be allowed to enter Camp Aguinaldo if he did not have a security pass which is required of all foreigners.

Cabunoc said Catapang signed on Friday a letter to the BI asking that Sueselbeck be declared persona non grata.

The AFP later said it would report Sueselbeck’s “misbehavior” to the German Embassy.

For their part, the lawyers of the Laude family said they would turn to the Supreme Court to rule on the issue of custody over the American Marine suspected of killing her on Oct. 11.

“We are thinking of immediately turning to the Supreme Court because the consequence of not having custody of Pemberton is clear,” Roque told reporters during Laude’s burial on Friday.–With reports from Julie M. Aurelio, Jerome Aning and Allan Macatuno, Inquirer Central Luzon