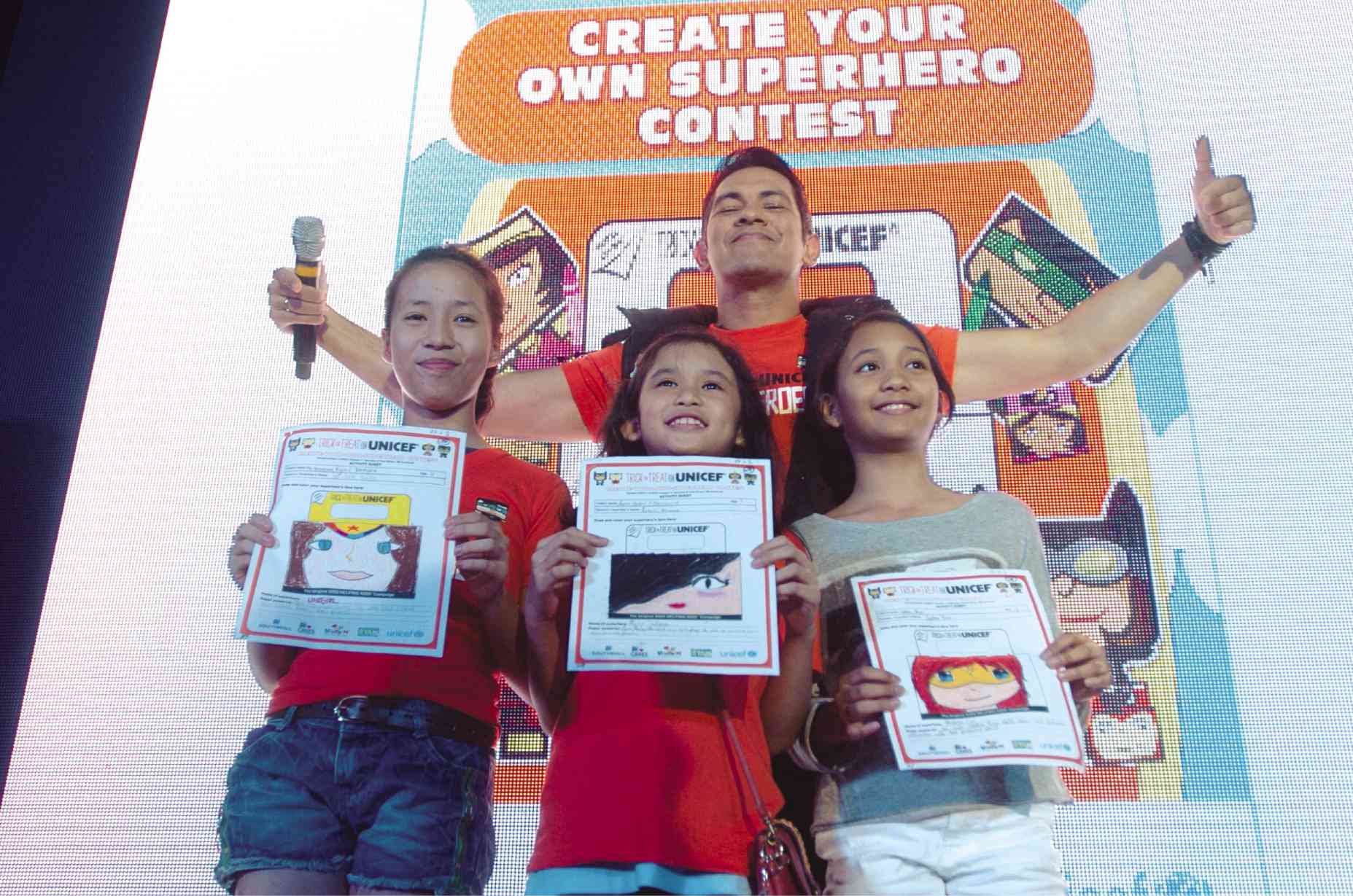 HALLOWEEN HEROES Iconic singer Gary Valenciano gives the thumbs-up for the young winners of the Create Your Own Superhero contest early this month at SM Mall of Asia. The contest was part of the launch of the Trick or Treat for Unicef 2014 project. RODEL ROTONI

When going trick-or-treating this Halloween, don’t just dress up like a superhero. Be a real one.

The United Nations Children’s Fund (Unicef) is encouraging children to learn the importance of reaching out to others this Halloween season through its unique trick-or-treat campaign.

Now in its third year, Unicef Philippines’ Trick or Treat empowers children to become heroes in their own way by helping those in need through cash donations, instead of candy and other sweet treats. They are also encouraged to ask their parents, relatives and friends to do the same.

Verity Rushton, a child protection specialist at Unicef, said the project could be a good opportunity for children to learn the value of helping others in need.

“[The youth] have an extremely important role in driving initiatives like these,” Rushton said during the campaign’s launch at SM Southmall in Las Piñas City early this month. “I think we can encourage them to become much more involved.”

Dennis Cruz, fund-raising officer for Unicef, said children had played a big role in the success of the campaign.

“Over the past two years, children all over the Philippines have raised over P750,000 to fund various programs,” he said.

According to Cruz, children were able to raise P450,000 in the campaign’s first year in the country in 2012. The amount went on to fund the educational programs of Unicef.

During the Zamboanga siege in September last year, Unicef asked children to help raise money to fund the international organization’s work in the conflict areas. The trick-or-treat money collected last year amounted to more than P300,000.

When Supertyphoon “Yolanda” hit the country on Nov. 8 last year, the kids may have rerouted some of their trick-or-treat donations to relief efforts, Cruz said.

“So this year, we’re asking the kids to raise money for emergency preparedness,” he said.

With the country being prone to calamities, the goal this year is to raise P1 million to aid in the organization’s disaster-preparedness initiatives, he said.

“This year we’re really focusing on helping raise funds so that we can be prepared, and I think this is something that the Philippines is already very good at—being prepared,” Rushton said.

Cruz said the additional fund would enable Unicef to stockpile emergency water kits, family kits and medical supplies in their warehouses so that anytime the need arises, the supplies could be mobilized within 24 hours.

“I think that if there’s any good that comes out of big emergencies like Yolanda is that [these provide] an opportunity for us to be able to emphasize the importance of strengthening preparedness, not just in schools but in communities,” Rushton said.

In cooperation with SM malls and Toy Kingdom, Unicef has come up with a few mechanics in joining the trick-or-treat program.

Parents or guardians and their children can get their free donation kit at any Toy Kingdom branch nationwide until Oct. 31. The parent or guardian must fill out the registration and consent forms for their child, after which they will be entitled to one kit. Only one kit will be given per child.

No purchase is required to obtain the kits that contain a brochure, an especially designed collection box, an official badge and a superhero mask. Using their kits, the children may start trick-or-treating anywhere for the duration of the program.

Participants will then turn over the collected money to any bills payment counters located at any SM Department Store, Supermarket, Hypermarket and Savemore branch, after which they will be given an official receipt care of Unicef. Children who will turn in their donations before Nov. 30 will also receive a special certificate of appreciation from the organization.

According to Unicef, a contribution of P500 could give two families a month’s supply of safe drinking water; P1,000 could provide four people with essential hygiene supplies such as soap, towels, toothpaste, toothbrushes and water pails; while P2,000 could supply ready-to-use therapeutic food, vitamins and medicine to four children who are severely malnourished.

Apart from the trick-or-treat campaign, Unicef has also launched a Create Your Own Superhero contest open to children ages 4-12. Participants may submit downloaded entry forms online until today. The five winning entries will receive special prizes and have the chance to be featured in next year’s trick-or-treat campaign.

Unicef’s Trick-or-Treat program began in 1950 in the United States as the Kids Helping Kids campaign. Started by Philadelphia schoolchildren, the initiative collected a total of $17 and kicked off a worldwide campaign that has since raised more than $170 million to help poor children receive medicine, better nutrition, safe water, education and emergency relief.

“Millions of children now participate in Unicef’s Halloween-related fund-raising campaigns worldwide, taking part in fun and educational activities that help them gain a better understanding of children’s rights and the challenges facing their peers in developing countries,” a Unicef statement said.

“The global slogan is to ‘Make Halloween count,’” said Cruz. “So [let’s] make it count for something more than just treats and candies.”

Performing during the launch was Unicef national ambassador Gary Valenciano, who encouraged the youngsters to participate in the campaign. In doing so, he told the children in the audience, “You are already heroes.”