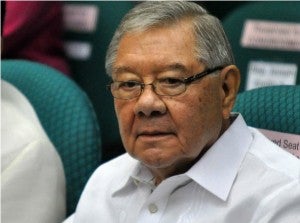 MANILA, Philippines—The emerging Asean Economic Community (AEC) can be a “formidable force in the global economy,” according to Speaker Feliciano Belmonte Jr., as he reassured policy-makers of initiatives in Congress to ensure maximum gains for the Philippines.

The leader of the House of Representatives said the chamber would prioritize and pursue economic reform measures to realize the vision of the AEC among the 10 member states of the Association of Southeast Asian Nations.

These measures include amendments to the restrictive provisions of the Constitution on foreign ownership and the passage of a fair competition law, Belmonte said.

“Integrating into the AEC is not only about opening up but also pushing for good governance by addressing in particular the key institutional weaknesses faced by the citizenry at large,” he told a briefing on the AEC at the House of Representatives on Oct. 21.

The briefing on the AEC was conducted by the special committee on globalization and the World Trade Organization, and the trade and industry committee, and attended by lawmakers, key House officials, representatives from the Department of Trade and Industry, and other stakeholders.

It envisages the Asean to be, among others, a single market and production base, a highly competitive economic region with equitable economic development that is fully integrated into the global economy.

Belmonte said the country would certainly face “heightened scrutiny” in meeting its commitments and obligations towards the Asean Community and its member states.

Asean has a market of 600 million people and a combined gross domestic product of $3 trillion, which potentially can make the AEC a formidable force in the global economy, he said.

Belmonte acknowledged that as a region, Asean has made progress in the implementation of commitments to the AEC by its member states.

These include efforts to facilitate the free flow of goods and services and regional trade facilitation, the elimination of duties on 99.2 percent of tariff lines for countries such as Brunei, Indonesia, Malaysia, Philippines, Singapore and Thailand; and reduction of 97.5 percent of all tariff lines to about 0 to 5 percent in Cambodia, Laos, Burma (Myanmar) and Vietnam.

Belmonte, however, said measures covering trade-customs modernization, standard and conformity, services liberalization, investments, and ratification of transportation agreements have not been fully implemented.

“This is due to delays in the ratification of signed Asean-wide agreements and their alignment with national domestic laws, as well as delays in the implementation of specific initiatives,” he said.

Several of the reform measures on the priority list of the 16th Congress include the enactment of an antitrust/fair competition law; amendments to the economic provisions of the 1987 Constitution on foreign ownership and equity; amendments to the Foreign Investment Act and the Tariff and Customs Code; reforms in the Aviation Sector through an open-skies policy.

“Just as the center of global economic gravity is shifting towards Asia, the AEC could play a pivotal role in insuring that the rising tide could lift all the members’ boats up, enabling each and every Asean member state to partake in broader region-wide wealth-creating activities,” Belmonte said.