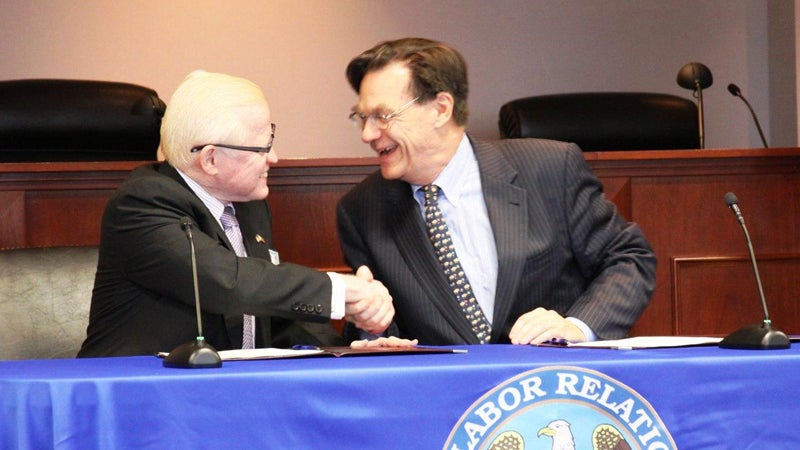 Philippine Ambassador to the US Jose Cuisia Jr. (left) and NLRB General Counsel Richard Griffin (right) shake hands after signing the MoU between the NLRB and the DFA at a ceremony held at the NLRB Board Hearing Room on Wednesday, October 22, 2014. (Photo by the National Labor Relations Board)

MANILA, Philippines–The Philippines and the US have signed an agreement that would ensure Filipino workers there are informed and educated about their rights under US labor laws.

The Department of Foreign Affairs (DFA) and the US National Labor Relations Board (NLRB) signed a Memorandum of Agreement that would “provide Filipino workers, their employers, and Filipino business owners with information, guidance, and access to education regarding their rights and responsibilities under the National Labor Relations Act,” the Philippine Embassy in Washington, D.C. said in a statement Friday.

Philippine Ambassador to the US Jose Cuisia, Jr., who signed for the DFA, described the agreement as a “step forward in the fulfillment of our mandate to protect worker rights.”

“As we partner with you in helping foster greater awareness among Filipino workers of their rights to freedom of association and collective bargaining, we hope to do our part in promoting the essence of dignity at work which they deserve, while at the same time empowering them with decision-making capabilities available to them in a free and open society,” Cuisia said.

This agreement is the third the Philippines has entered into with US labor agencies. The Embassy had previously signed agreements with the Wage and Hour Division (WHD) and the Occupational Safety and Health Administration (OSHA) of the Department of Labor.

The US is home to the largest overseas population of Filipinos at almost 3.5 million, according to the December 2012 figures of the Commission on Filipinos Overseas.

The large majority of Filipinos in the US have a permanent status while there are an estimated 126,000 temporary and 271,000 irregular or undocumented Filipinos.

Under the US National Labor Relations Act, workers are guaranteed “the right to join together, with or without a union, to improve their wages and working conditions, or to refrain from such activities,” the embassy said.

“Employers and employees alike are protected from unfair labor practices,” it said.

The NLRB, the Philippine Embassy in Washington, D.C., along with NLRB Regional Offices and Philippine Consulates in New York, Chicago, Los Angeles, San Francisco and Honolulu, will cooperate to provide outreach, education, and training, and to develop best practices.

US labor issues and workers’ rights explained to Filipino expats