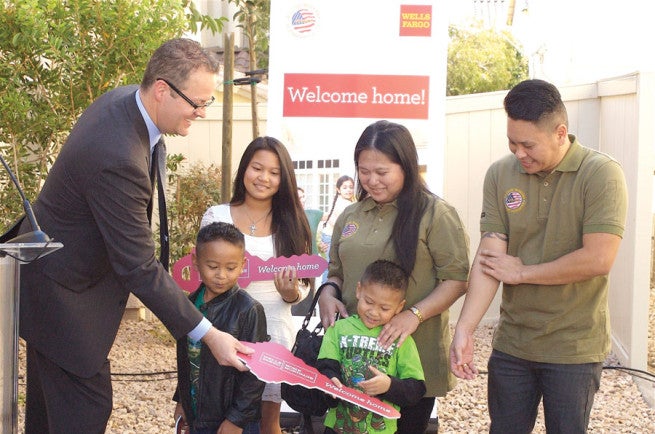 LAS VEGAS—A wounded Filipino veteran is now the owner of a home in Silverado Ranch, after two years of waiting.

Marine veteran Lance Corporal Nino Ray Capanang, his wife Emilie and their three children moved into the renovated home, complete with brand new appliances, on Monday, Oct. 20, as part of an initiative organized by Wells Fargo and the Military Warriors Support Foundation (MWSF).

“It’s a mortgage-free home,” Capanang said. “What else can I ask for?”

Since 2013, the bank and the foundation have been donating mortgage-free homes to wounded military veterans under the Home 4 Wounded Heroes and Homes 4 Gold Stars programs.

Wells Fargo has also allocated $20,000 for Capanang over the next three years, as he undergoes financial counseling.

“The first [goal] was to get a house and the second goal is…[to] proceed with our photography business, so we’re going to invest towards that,” said Capanang.

The Las Vegas-native enlisted in the Marine Corps in 2005 and served in Iraq as a rifleman. He was wounded in a gunfire incident that injured one hand and his hip, resulting in a medical discharge from the military. He was awarded the Purple Heart for his service.

In April, a Filipino veteran, US Army Specialist Dickson Daggi was also a recipient of one of the homes in North Las Vegas.

Wells Fargo’s Military Affairs program has committed $35 million—$30 million for the housing program—to reward veterans for their service and help them transition back to civilian life by providing career and financial mentoring.