Why Palace did not condemn killing 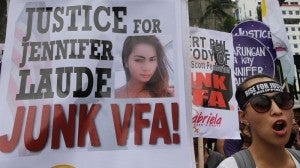 MANILA, Philippines—“It has been nearly two weeks since Laude was killed, why has the Palace not issued a statement condemning the killing?” Malacañang was asked on Thursday.

Communications Secretary Herminio Coloma Jr. replied that such a statement might affect the objectivity of the investigative authorities.

“We are letting the judicial process take its course. And if there is, as what you said, a ‘strong condemnation’ [from Malacañang], this might affect the objectivity of those looking into the incident,” Coloma said.

“What is important is to ensure the integrity of the investigation according to the laws of our republic because we have jurisdiction over this case,” he added.

Coloma also played down criticism on social media of President Benigno Aquino III’s decision not to go to Laude’s wake.

“Let us respect the President’s sentiment [on going to Laude’s wake]. And according to the information gathered by our New Media Unit, only 3 percent were against President Aquino’s statement regarding this issue,” Coloma said.

Asked at a foreign correspondents’ forum on Wednesday if he was following Vice President Jejomar Binay’s lead and go to Laude’s wake, Mr. Aquino replied: “In general, I don’t attend wakes of people I don’t know. I’m uncomfortable with trying to condole with people who don’t know me. How can I say that I really sympathize with them by trying to assuage their loss at that point?”

Others said they believed Mr. Aquino should have phrased his statement more diplomatically, rather than being “brutally honest,” as there was a bereaved family that was trying to get over with a tragic loss.