‘The issue is the killing’ | Global News
Close
menu
search

‘The issue is the killing’ 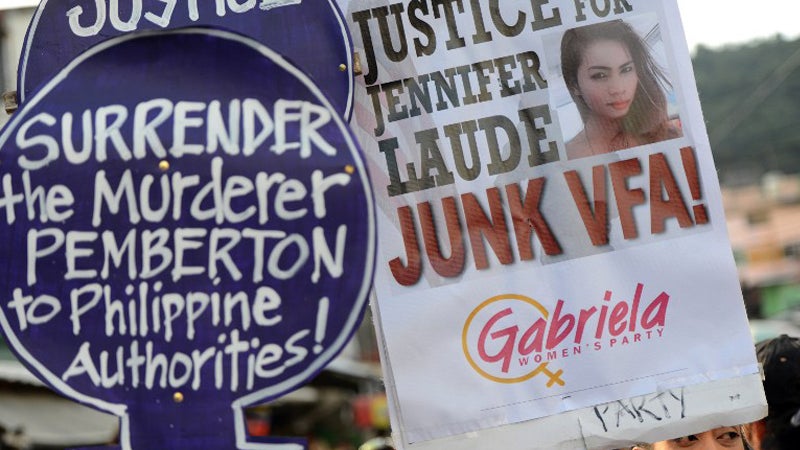 OLONGAPO CITY, Philippines—While recognizing the gender rights issue related to the killing of transgender woman Jeffrey “Jennifer” Laude, allegedly by a US Marine, the city prosecutor on Tuesday said she would focus on the “criminal aspect” in the preliminary investigation of the case.

“What is clear is that a person is dead and it’s not about the gender,” City Prosecutor Emilie Fe de los Santos told the lead counsel of Laude’s family, who asked that the victim be referred to in the proceedings and documents as “Jennifer.”

“Let’s also put an end to the issue that there is bias in the gender. There’s no gender issue here. The issue is: Somebody got killed,” she said.

Laude was found dead in a bathroom of a motel here on the night of Oct. 11. Her body was found by a motel employee at 11:45 p.m., about an hour after she checked in at the motel with a foreigner, who witnesses later identified as Pfc. Joseph Scott Pemberton of the US Marine Corps.

Pemberton did not show up during the preliminary investigation despite a subpoena, prompting De los Santos to require his lawyer, Rowena Flores, to present him on Oct. 27.

Asked why her client was absent, Flores said the subpoena, which was coursed through the US Embassy and received by her law firm, Accra, on the night of Oct. 17, did not require Pemberton’s attendance on Tuesday. It only asked the US Marine to file a counteraffidavit within 10 days from receipt of the subpoena or until Oct. 27, she said.

In Manila, the Department of Foreign Affairs said it was “disappointed” at Pemberton’s absence.

“By not appearing, he may be considered to have waived his right to be heard. The prosecutor should be able to determine the consequences of his non-appearance,” Assistant Secretary Charles Jose, DFA spokesman, said at a briefing.

Still, Jose said the American took the advice of his lawyer as he acknowledged that “this was part of the due process and the rules of court.”

In a press conference after the preliminary investigation, the Laude family’s counsel, Harry Roque, said the absence of Pemberton displayed some uncertainty as to whether the American government would cooperate.

“The family fears it will not receive justice until Pemberton surrenders to Philippine jurisdiction,” Roque said.

Laude’s mother and sister expressed doubts that Pemberton was still in Philippine territory. Reports said Pemberton was being held at the USS Peleliu that is docked on Subic Bay.

“What happens now? Who do we turn to in order to secure Pemberton?” Julita Laude asked in Filipino. “They are hiding a bad man. We are not blind to his nature. We will find a way to bring justice and continue fighting until the end.”

Pemberton remains in the country, Jose said. Without giving details, he said the “Philippine side has actually seen (Pemberton) face to face to make sure he is in the Philippines.”

“He was brought down from the vessel and they met on land,” he said of Pemberton and the Philippine representative. He said this might have happened last weekend.

Jose said the request to see Pemberton was an “instance of the Philippine government.”

De los Santos asked the witnesses called to the preliminary investigation to sign and swear to the veracity of their affidavits. Among them were Marilou Laude, Olongapo police officials and investigators and employees of the motel.

A major witness, identified as “Barbie,” Laude’s friend who accompanied her and Pemberton to the motel, arrived at 3:50 p.m.

Flores, who said she was appearing in her private capacity and not as a representative of Accra, said Pemberton “may or may not file a counteraffidavit.”

She asked De los Santos that the defense team be given until Oct. 27 to study the documents relating to the murder complaint filed by Laude’s sister, Marilou, on Oct. 15.

Roque later asked the prosecutor that the Laude family be allowed to get DNA and fingerprint samples from Pemberton. De los Santos told the lawyer to put the motion in writing.

When he asked that Laude be referred to as Jennifer in the proceedings and documents, De los Santos agreed and assured the family that they would respect the gender rights issue related to the case.

“We focus on the criminal aspect, not on the side issues,” she said.

Roque also asked the prosecutor that an engagement ring, which was part of Laude’s belongings collected by investigators, be returned to the family.

De los Santos later asked the owners of Celzone Lodge and Ambyanz Disco Bar, the areas where Laude and Pemberton were reportedly last seen, to retain the arrangement of the things inside their establishments for the prosecution team’s inspection.

“Do not change anything to help us verify if the statements of the witnesses are true,” she said.

Roque asked De los Santos if there was a way the US Navy’s Naval Criminal Investigative Service (NCIS), which conducted a separate probe of the case, could inform them if Laude’s body would be subjected to further examination so the family could decide if they would push through with the cremation on Friday.

De los Santos, however, said she had no jurisdiction over the NCIS, noting that her office had not received any document from the agency.

Sueselbeck said the Philippine government should fight for its rights and must protect its own people. He said he was perplexed by the high-profile debates over who had jurisdiction over Pemberton.

“I have to be careful because I am looking from the outside,” he said. “But the first difficult thing for me to understand is why we have this discussion about who is in charge.”

Sueselbeck said it would not have been an issue in his country, Germany, which was an ally of the United States much like the Philippines. A crime committed on German soil gives German authorities jurisdiction over the offender, he said.–With a report from Christine O. Avendaño in Manila