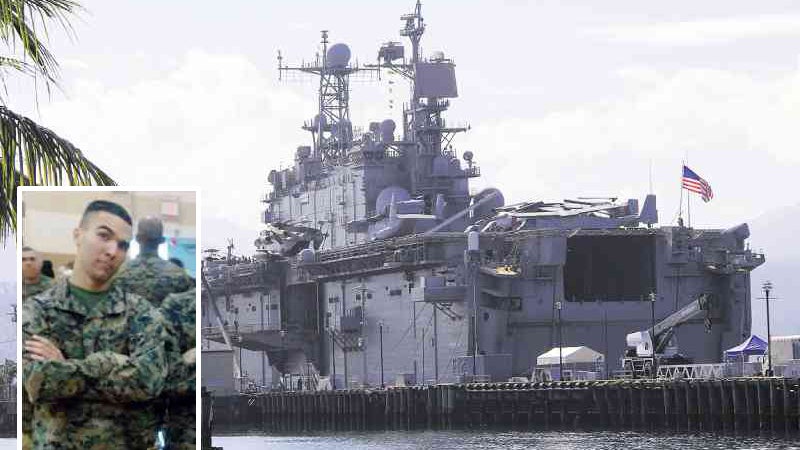 The USS Peleliu at Subic Bay where US Marine Joseph Scott Pemberton (inset) is reportedly held until the investigation of the US soldier’s involvement in the killing of a Filipino transgender in Olongapo City is done. AP/INSET PHOTO FROM PEMBERTO’S FACEBOOK ACCOUNT

MANILA, Philippines—Private First Class Joseph Scott Pemberton was a no show at the preliminary investigation into his alleged murder of a transgender in Olongapo City because he was “not required to appear”.

This was despite the Department of Foreign Affairs’ (DFA) pronouncement that Pemberton was “expected” and that he should appear before the prosecutor “for his own sake.”

The legal counsel for Pemberton told Emelie Delos Santos, chief of the Olongapo Prosecutors Office, that the subpoena delivered to the US Embassy by the DFA did not require Pemberton to personally appear to submit his sworn statement.

“The subpoena which was received last October 17 did not require the personal appearance of Pemberton,” Pemberton’s legal counsel said.

“We are given 10 days or until Oct. 27 from receipt [of subpoena] within which to submit our counter affidavit,” the counsel said.

They will use the 10 days to study the documents further after which they “may or may not file a counter affidavit.”

He is presently under the custody of the US military on board the USS Peleliu docked at the port of Subic.

The DFA said that Pemberton would be risking his case if he would not appear to provide his counter affidavit.

This was backed by Justice Secretary Leila de Lima who insisted that she saw no reason why the suspect could not attend the preliminary investigation.

The US, however, said Pemberton may decide not to appear in his preliminary investigation depending on the advice of his lawyers.
RELATED STORIES