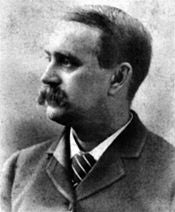 CHICAGO—“Why Should We Know Dean Worcester?” a lecture held October 15 at the Philippine Consulate General was hailed as easily the most relevant among the 22 events planned for the month-long celebration of the Filipino American History Month in this city.

Mark Rice, professor and chairperson of American Studies at St. John Fisher College, Rochester, New York, spoke of the zoologist who arguably was the most influential American on the formation of US imperial policy in the Philippines, from the years before the outbreak of the Spanish American War through the almost half a century of the American Occupation that ended on July 4, 1946.

Rice examined voluminous materials and thousands of photographs on the under-examined life and works of this colonial administrator who started as a member of the Schurman Commission sent by President William McKinley to the Philippines in 1899 to make recommendations on the course of action he had to take regarding the Southeast Asian archipelago.

Rice’s presentation of the manipulation and biases of Worcester’s studies that greatly influenced the McKinley Administration to colonize the Philippines on the pretext of civilizing the “savages” took most of those in the audience by surprise.

The ethnic minorities like the Aetas, Igorots and Tagbanuas were wrongfully reported as the dominant Filipino population; that they were supposedly being exploited by educated tribes like the “Tagalogs.” Many of the lecture attendees found Rice’s revelations “shocking.”

Gloria Calonge, wife of Chicago Consul General Generoso Calonge, told Rice, “Thank you for taking time to share these aspects of our history.  I admit, many of these came as new to me.” The sentiment was shared by some in the audience.

Juanita Salvador-Burris, holder of doctorate degree in sociology, admitted that when she saw Worcester’s photos of Filipino Tribal minorities while she was a graduate student at the University of Chicago in the 1960s, she took them as mirror of ourselves as a Filipinos, and she never questioned then the validity or integrity of the studies and literature produced by a biased scientist.

Worcester, Rice added, consistently opposed the granting of independence to the Philippines. He argued that the savages were incapable of self-government. After serving for 12 years as Secretary of the Interior, he resigned in 1913 and wrote The Philippines Past and Present—a two-volume history book that was used as a school textbook during the American regime.

For all his claims that the US was needed to establish democratic processes in its colony, Worcester sued Teodoro Kalaw, the editor of El Renacimiento and its publisher, Martin Ocampo for their editorial published on October 30, 1908, titled “Birds of Prey,” denouncing an unnamed American official for using his government position to enrich himself. Though not mentioned in the article, Worcester sued for libel.

The journalists were found guilty by an American judge and lost all the appeals all the way up to the Supreme Court. Kalaw was sentenced to one-year imprisonment and P3,000 fine while Ocampo was meted six months and P2,000 fine. But US Governor-General Francis Burton Harrison pardoned the duo.

Worcester’s articles found a lucrative market in mainstream publications like the National Geographic.  The New York Times was generous in its praises for his works. These helped pack lecture halls where Worcester earned millions in today’s dollar equivalent. He enriched himself further with his fortune invested in cattle raising in Mindanao and in coconut plantations all over the islands.

The zoologist-carpetbagger with a camera that ventured in the Philippines in 1887 could easily claim the reputation of the first PhotoShopper who duped America into its first colonial adventure. Mark Rice’s book states that his photos commanded thousands of dollars.

An applause followed a comment by someone in the audience that the October 15 consulate event was the most relevant among the events lined up for this year’s Filipino American History Month in Chicago.