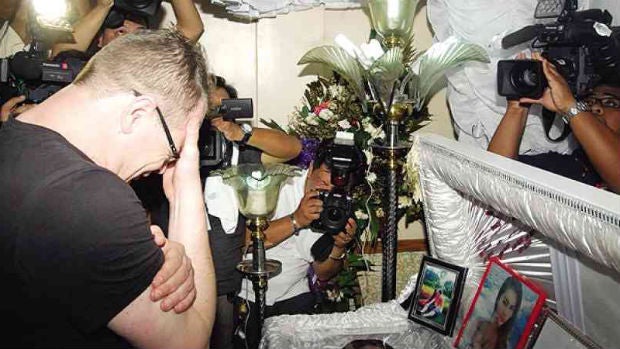 STRICKEN WITH GRIEF Marc Sueselbeck is overcome with emotion when he sees the body of his transgender girlfriend, Jeffrey “Jennifer” Laude, who was allegedly killed by an American soldier. Sueselbeck arrived at Ninoy Aquino International Airport from his hometown in Germany on Monday to attend Laude’s wake in Olongapo City. ALLAN MACATUNO/INQUIRER CENTRAL LUZON

OLONGAPO CITY, Philippines–Marc Sueselbeck, the German boyfriend of murdered transgender Filipino, Jeffrey “Jennifer” Laude, went straight to his girlfriend’s coffin as soon as he arrived in a funeral parlor in this city at 4 p.m. Monday.

Sueselbeck, who arrived at the Ninoy Aquino International Airport from Germany on Monday noon, was met here by Laude’s mother, Julita, and sister Marilou.

He was quiet and contemplative as he sat beside Laude’s coffin.

It has been a week since Laude was found dead inside a bathroom of a motel in the city. Her body was discovered by the motel’s room attendant at 11:45 p.m. on Oct. 11, minutes after her companion, who witnesses said was an American soldier, left.

Marilou Laude, on Oct. 15, filed a murder complaint against Pvt. 1st Class Joseph Scott Pemberton of the United States Marine Corps, who is held by American authorities at the warship USS Peleliu docked at Subic Bay.

Sueselbeck spoke to Marilou and confided to her that he has not yet accepted the tragedy that cost him his girlfriend. He said he and Laude spent time in Leyte province last year, the final time they would be together.

Sueselbeck and Laude met online and were in a relationship for two years. He had planned to marry her in Thailand next year, her relatives said.

In a telephone interview from Germany last week, Sueselbeck said he wanted Pemberton to suffer the death penalty.

“But if Philippine law does not allow it, I would like to see the [suspect] punished accordingly. Death penalty or not, I hope we will get justice for what happened to her,” he told the Philippine Daily Inquirer.