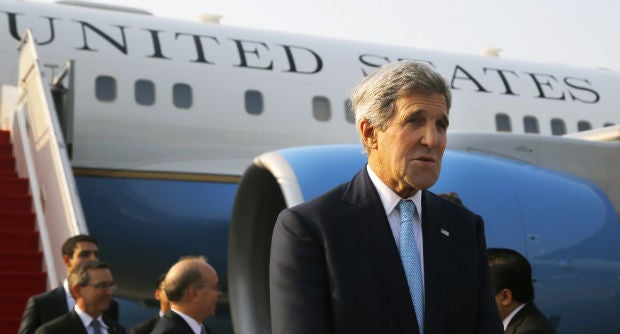 U.S. Secretary of State John Kerry arrives at the airport in Jakarta, Indonesia, on Monday Oct. 20, 2014, for the inauguration of new Indonesian President Joko “Jokowi” Widodo and meetings with other regional leaders. Kerry is in Indonesia for a brief visit aimed at building Asian support for the fights against Islamic State extremists and the deadly Ebola virus. AP

JAKARTA — US Secretary of State John Kerry is in Indonesia for a brief visit aimed at building Asian support for the fights against Islamic State extremists and the deadly Ebola virus.

Highlighting the Obama administration’s commitment to the Asia-Pacific region, Kerry led the US delegation to the inauguration of new Indonesian President Joko “Jokowi” Widodo, a reformer who won hotly contested elections in July.

Kerry arrived in the capital, Jakarta, on Monday after more than 26 hours of trans-oceanic flights that began Saturday in his hometown of Boston, where he held two days of talks with Chinese State Councillor Yang Jiechi.

In addition to attending Widodo’s inauguration, Kerry plans separate meetings in Jakarta with senior officials from Australia, Brunei, Malaysia, the Philippines and Singapore before leaving Indonesia for Germany on Tuesday.

The US has high hopes that Indonesia, the world’s most populous Muslim-majority country, as well as its predominantly Muslim neighbors Malaysia and Brunei can play a significant role in combatting Islamist extremism and blunting propaganda from the militants now threatening Syria and Iraq.

Officials traveling with Kerry said preventing extremist recruitment in Southeast Asia is a main non-military priority of the coalition the US is assembling to combat the Islamic State group.

The US is looking for these countries “to do more and cooperate more” to keep extremist proselytizing out of their territories, rebut extremist ideologies, prevent the flow of foreign fighters and crack down on terrorist financing, the officials said.

On Ebola, Kerry will ask nations to boost their contributions to the global effort to stop the spread of the virus, the officials said. The officials spoke on condition of anonymity because they were not authorized to preview Kerry’s discussions by name.

The officials said another reason Kerry was making the very short trip to Indonesia is to underscore the administration’s so-called “pivot” or “re-balance” to Asia, home to most of the world’s fastest growing economies. Kerry has made eight trips to Asia in the last 20 months and President Barack Obama will be heading to China, Myanmar and Australia next month.

US relations with China have been prickly, to say the least, over the last several months, most recently over the crackdown on pro-democracy protesters in Hong Hong and U.S. accusations of Chinese cyber-spying.

At the same time, several southeast Asian countries whose officials Kerry will see in Jakarta — notably the Philippines and Brunei — are involved in disputes with China in the South China Sea, where tensions have been rising over competing claims to potentially oil-rich territories. Those disputes, and the U.S. desire to see them resolved peacefully, were a focus of Kerry’s discussions with Yang in Boston.

Meanwhile, the US is in trade negotiations with Brunei, Singapore and Malaysia, among others, and hoping to conclude an agreement on its proposed Trans-Pacific Partnership in the coming months.

US ‘at war’ with Islamic State radicals

Kerry calls for ‘coalition of nations’ in fighting IS