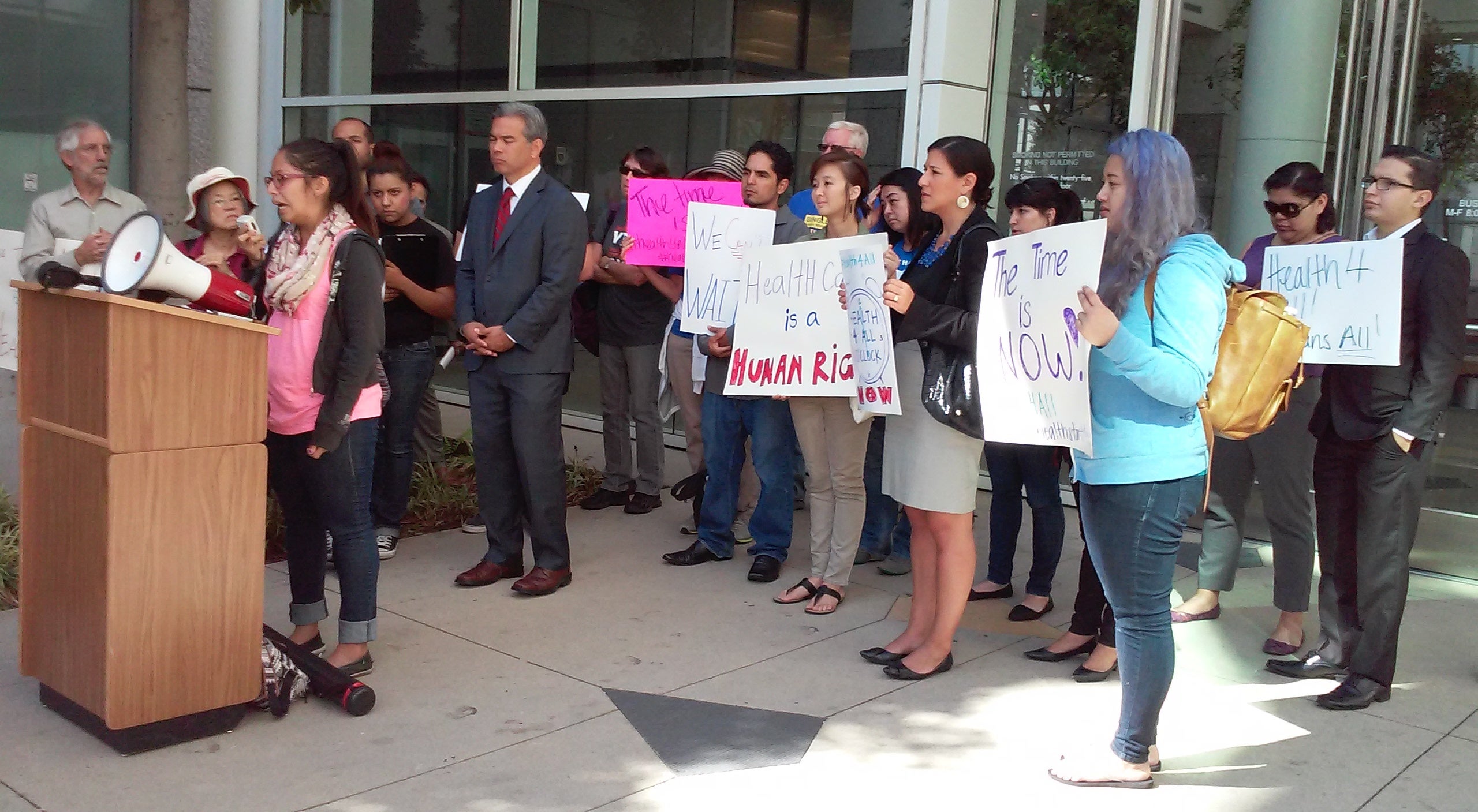 Undocumented Filipina Beatriz Sanchez speaking to supporters of “Health Care for All.” PHOTO BY JUN NUCUM

OAKLAND, California – A spirited rally in front of the Elihu M. Harris State Building renewed calls October 10 for “health care for all” after the latest study showed huge support among Californians for including everyone, regardless of immigration status, in health care coverage in the state — a whopping 60 percent in favor to 28 percent opposed.

Poll results also showed that California voters believe that access to health care is not a privilege but a human right and that helping undocumented immigrants with health care is the “right thing to do.”

Also, 56 percent backs the expansion of MediCal benefits to undocumented immigrants. Also mentioned in the TCE study was that 1.4 million uninsured and undocumented Californians are still left without access to affordable preventive care, leaving them to turn to emergency services, which are a lot more expensive, when dire situations demand attention.

With the November 2014 election just weeks away, candidates’ chances of winning may also be significantly affected by the poll finding that voters would view a legislative candidate more favorably (54 percent to 33 percent) if the candidate supported easy health care access for the undocumented. Even the governor would gain (50 percent to 36 percent) if he supported the change. California’s ethnic communities and young voters also show strong support for expanding access to coverage.

The study was conducted statewide from August 24-31, 2014 among 800 registered California voters with an additional oversample of 154 interviews among African-American voters.

Filipino State Assemblymember Rob Bonta of the 18th district said the study further bolstered his view that “health care is a right and not a privilege, not for a few but for all.”

“There is a moral and fiscal imperative for SB 1005 introduced by Senator Ricardo Lara also known as the health for all bill,” Bonta explained.

Bonta admitted that the bill did not make it this year but will be reintroduced. He also promised to ask all his colleagues to support it by convincing them of the moral basis and fiscal advantages.

Bonta would also impress upon his colleagues that money should be spent for preventative, wellness and primary health care instead. Besides, he aims to highlight the contributions the undocumented have made to the state’s future, health and well-being even while out of status.

“I ask all of you to continue with your commitment. We need you here, in every district across the state, and in the capitol to lend your voices about how important this bill is and how much a priority it is. I am honored to be here. I appreciate your commitment in health for all and we will continue to fight together,” Bonta exhorted.

Another rally speaker was Denisse Rojas, Mexican-born co-founder of Pre-Health Dreamers, an international organization of a group of undocumented students who aspire to be professionals

Rojas only consistent health coverage was when she went to college at University of California in Berkeley. Unfortunately, her mother at that time was diagnosed with a uterine ailment necessitating surgery that was denied because her mother was undocumented.

“Aware that my mom’s condition will worsen if she does not get proper medical attention on time, she made a tough decision of immigrating to Canada where was able to get universal health care in three months including the surgery she needed,” Rojas said.

“Unfortunately, because of my immigration status, I cannot leave to see my mom while my mom also cannot go back to the U.S. because she used to be undocumented,” Rojas intimated.

Undocumented Filipina student Beatrice Sanchez emphasized the need for health care that is affordable to everyone and that does not discriminate.

“Our status may be undocumented but health care does not have a status. Health care is for everyone, healthcare is universal, and they should not put a label on heath care. Call your legislators, lobby them or do whatever you need to do to convince your legislators to support free health care for all,” Sanchez pleaded.