No ransom was paid, Palace insists

President Benigno Aquino III was quite pleased at the news that German nationals Viktor Stefan Okonek and Henrike Dielen had been released by their captors, but Malacañang still would not confirm reports that ransom was paid in exchange for their freedom.

“The President was happy to receive the news yesterday that the two German hostages had already been recovered,” and inquired into their physical condition, said deputy spokesperson Valte on the government Radyo ng Bayan.

But Valte stressed that the government did not sanction the payment of ransom, even as media reported that the kidnappers claimed having been paid P250 million.

Spokespersons for the Abu Sayyaf extremists that abducted Okonek and Dielen claimed that ransom had been paid, which led them to initially abort their threat to execute Okonek and to eventually free both Germans.

The military and the German foreign ministry on Saturday both confirmed that Okonek, 71, and Dielen, 55, were now safely back with the German embassy in Manila.

“We are relieved to confirm that the two Germans are no longer in the hands of their kidnappers. They are being taken care of at the embassy in Manila,” said a German foreign ministry spokesperson.

“We thank the government of the Philippines for their close collaboration, undertaken with full confidence,” the spokesperson added.

Lt. Col. Harold Cabunoc, the Armed Forces of the Philippines (AFP) public affairs office chief, said the German kidnap victims were released in Patikul, Sulu, at about 8:50 p.m. on Friday. He did not say who took custody of Okonek and Dielen from the kidnappers.

He said the two were brought to a military camp in Jolo at 9:20 p.m. for a medical checkup. They were then transported to Zamboanga City where they were given more medical attention, he said.

A private plane flew Okonek and Dielen from Zamboanga to Manila at dawn on Saturday. They arrived at Villamor Air Base at 6:45 a.m., and the German embassy took custody of them, said Cabunoc. 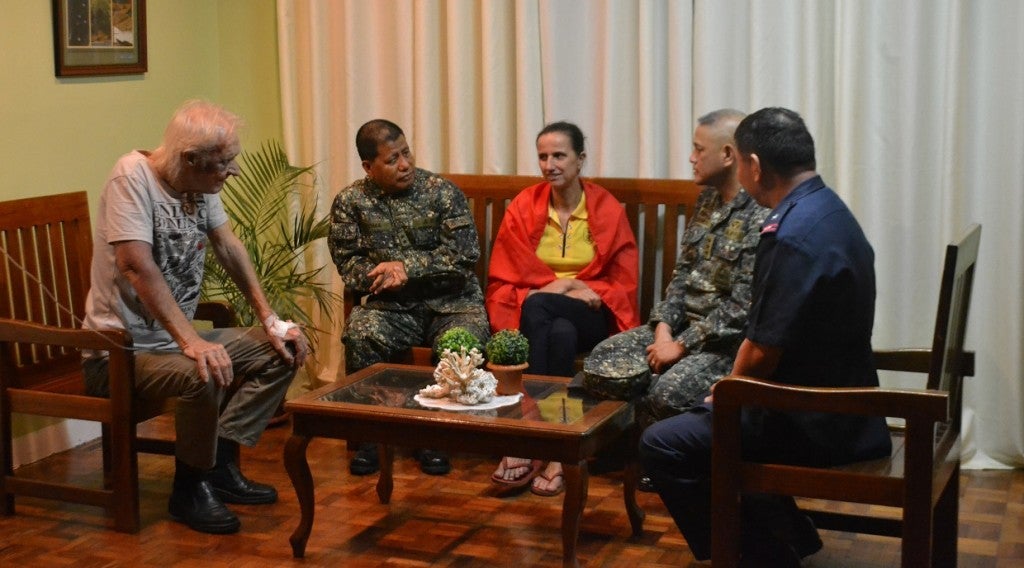 In this photo released by the Armed Forces of the Philippines, kidnapped German nationals Stefan Okonek, left, and female companion Henrike Dielen, center, rest inside the Western Mindanao Command in Zamboanga city in southern Philippines, Saturday, Oct. 18, 2014, after they were freed from the hands of the Muslim extremist group the Abu Sayyaf. Okonek and Dielen, who had been kidnapped and held for six months in the southern Philippines were released Friday by the militant group just hours after it had threatened to behead one of them if no ransom payment was made, the Philippine defense chief said. (AP Photo/Armed Forces of the Philippines Western Mindanao Command)

“I cannot confirm that there has been a ransom paid primarily because… the longstanding policy of government is that we do not engage in the payment of ransom,” Valte said.

However, while the Philippine government is quite firm about its no-ransom policy, it cannot dictate on others who may want to pay off the kidnappers in exchange for the freedom and safety of the hostages, she said.

Valte directed questions about the supposed P250-million ransom payment to the Armed Forces “primarily because they have more of the details and they provided support to the law enforcement operation.”

The AFP on Saturday cast doubt on the ransom payment claim of the kidnappers, saying that it was more because of the heightened pressure put on the terrorists by the “law enforcement operations” of the military and the police that the hostages were released.

Cabunoc described as “propaganda” the claim of a P250-million ransom payment made by Abu Rami, the spokesperson of Radulan Sahiron, the leader of the Abu Sayyaf faction that seized the Germans.

“Of course he (Rami) can always say that. As far as I know, there was no ransom paid, at least not from our side because we don’t negotiate with terrorists,” he said.

According to Cabunoc, the massive deployment of troops and K9 units to Sulu to surround the kidnappers’ lair was what did the trick, putting pressure on the kidnappers to abandon the two hostages.

“It was like we had eye contact with them. They (kidnappers) could see us. The area where they were was not heavily forested,” he said.

He said pursuit operations were continuing but the retreating terrorists were using civilians as human shields.

Cabunoc said he expected an encounter between the two forces anytime today.

“This is a full-scale deployment because the AFP chief wants to show that the AFP is not there just because of the two Germans,” Cabunoc said.

“We are thinking about the 10 other hostages as well,” he added. With an Agence France-Presse report

German’s execution postponed after delivery of some money