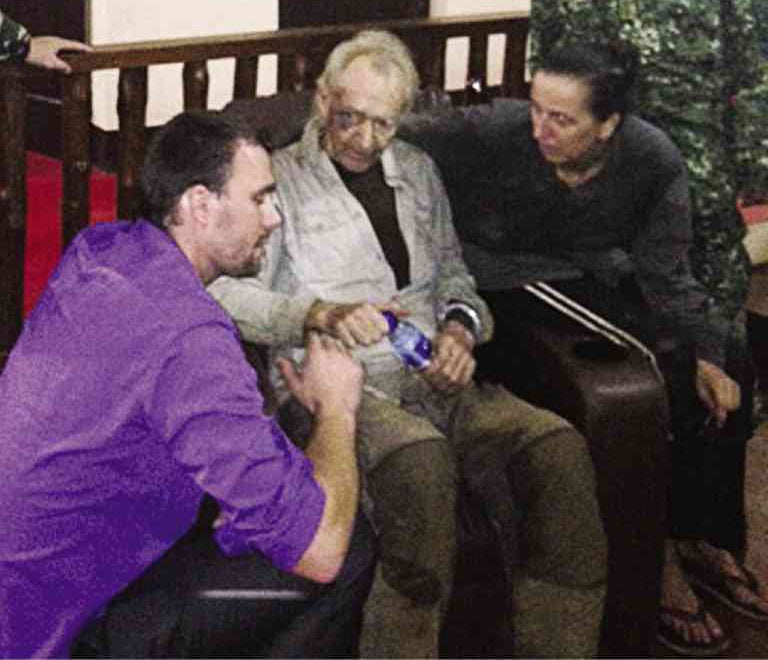 ZAMBOANGA CITY—The release of the two German hostages, Stefan Viktor Okonek and Henrike Dielen, has brought into focus the fate of other Abu Sayyaf kidnap victims, some of whom have been held since 2010.

Lt. Gen. Rustico Guerrero, head of the military’s Western Mindanao Command, admitted that authorities had yet to recover 11 captives, including two Europeans, a Malaysian and a Chinese. Seven of the hostages are Filipinos, he said.

Okonek and Dielen were released Friday night after payment of a P250-million ransom, according to Abu Sayyaf spokesperson Abu Rami.

But the Armed Forces of the Philippines on Saturday said it doubted that ransom was paid.

Cabunoc described as “propaganda” the claim of Rami, spokesperson for Radulan Sahiron, leader of the Abu Sayyaf faction that kidnapped Okonek and Dielen in the south in April.

“Of course, [Rami] can always say that. As far as I know, there was no ransom paid, at least not from our side, because we don’t negotiate with terrorists,” Cabunoc said.

Cabunoc did not say who received Okonek and Dielen from the kidnappers. He said the two were taken to the military camp on Jolo Island at 9:20 p.m. for medical checkup.

From the military camp, Okonek and Dielen were transported to Zamboanga City, where they received further medical attention, Cabunoc said.

He said Okonek and Dielen arrived at Villamor Air Base in Manila at 6:45 a.m. on Saturday. They were turned over to officials from the German Embassy, he said.

According to Cabunoc, the massive deployment of troops and tracker dog teams to Sulu province to ring the Abu Sayyaf’s lair pressured the kidnappers into abandoning their two hostages.

According to Guerrero, what the military and police are doing about the other hostages might not be as publicized as the more dramatic rescues, but these are also meant to secure the freedom of two bird-watchers, the Dutch Ewold Horn and Lorenzo Vinciguerra, a Swiss national.

Guerrero said efforts were also being made to secure the freedom of Malaysian Marine police officer Kons Zakiah Aleip, who was abducted last July; Chan Sai Chuin, 32, a Chinese kidnapped in Kunak, Sabah, on June 26; and the seven Filipinos.

He said the captives were being held by various Abu Sayyaf factions.

But the Sulu-based Bangsamoro Against Kidnapping and Other Crimes (Bassakao) said the military’s figure on the number of hostages being held by the Abu Sayyaf was wrong.

He said Bassakao had tried to ascertain the condition of some of the hostages but military movements in the hinterlands were preventing it from doing so.

The Abu Sayya has kidnapped many foreigners over the years and has even beheaded some of them to impose their ransom demands, strike fear and grab media attention.

On April 23, 2000, nine Malaysians, three Germans, two French, two Finns, two South Africans and a Lebanese were kidnapped along with two Filipinos from a resort in Sipadan, Malaysia, and brought to Jolo Island by boat. All the hostages, except for one Filipino, were rescued in September 2000. Roland Ulla escaped in 2003.

In July 2000, foreign media people, including German journalist Andreas Lorenz and French journalists Jean-Jacques Le Garrec and Roland Madura, were seized by the Abu Sayyaf while they were covering the Sipadan hostage crisis. German magazine Der Spiegel admitted to having paid the ransom for Lorenz’s release while Le Garrec and Madura escaped in September 2000.

In August 2000, Jeffrey Schilling voluntarily met with the Abu Sayyaf but was also held hostage by the group after he got into an argument with them over religious and political issues. He was rescued in April 2001.

In May 2001, the Abu Sayyaf abducted three Americans and 17 Filipinos from Dos Palmas Resort in Palawan province and transported them by sea to Basilan province. Guillermo Sobero, a tourist from Corona, California, was beheaded in June 2001 as an “Independence Day” gift to then President Gloria Macapagal-Arroyo. US missionary Gracia Burnham was rescued in June 2002 but her husband Martin was one of those killed during the rescue operation.

In January 2009, Italian Eugenio Vagni, Swiss Andreas Notter and Filipino Mary Jean Lacaba of the the Geneva-based International Committee of the Red Cross were kidnapped by the Abu Sayyaf. Lacaba was released in April and Notter escaped a few days later. The Abu Sayyaf freed Vagni in July.

In June 2011, Indian national Biju Kolara Veetil was abducted in Patikul town, Sulu. Veetil married a local and was visiting his in-laws when he was seized by suspected Abu Sayyaf gunmen. He was able to escape in August 2012.

In December 2011, Australian Warren Richard Rodwell was abducted in his home in Ipil town, Zamboanga Sibugay province, by the Abu Sayyaf. He was released in March 2013 after his family paid ransom.

In February 2012, three bird-watchers—two Europeans and a Filipino—were abducted in Tawi-Tawi. Horn, Vinciguerra and Filipino Ivan Sarenas were seized while heading back in a boat to Bongao after bird-watching activities in Panglima Sugala town. Sarenas was able to escape and two other Filipinos, the boat’s operator and a local official serving as their guide, were allowed to go. But the Europeans were taken and are still being held.

In June 2012, Jordanian journalist Baker Abdulla Atyani, Al-Arabiya’s TV bureau chief for Southeast Asia, and his two Filipino companions, Ramelito Vela and Rolando Letrero, were abducted in Jolo, Sulu. Vela and Letrero were freed in February 2013 while Atyani was released in December 2013.

In November 2012, the Abu Sayyaf abducted two Malaysians from a plantation in Sabah on the island of Borneo. Tung Wei Jie, a Malaysian plantation manager, was able to escape in August 2013 while his older cousin, Wei Fei, was said to have died of illness a few months before.

In April this year, Gao Huayun, a Chinese national, and a Filipino resort worker Marcy “Mimi” Dayawan, were abducted from Singamata Reef Resort in Malaysia and brought to Sulu by an armed group suspected to be the Abu Sayyaf. They were released on May 31.

Two Germans, Okonek and Dielen, were seized at gunpoint from a yacht in the waters between Borneo and the southern Philippines in late April.

In May this year, Yang Zailin, a Chinese managing a fish farm in Sabah, was kidnapped by gunmen linked to the Abu Sayyaf. Inquirer Research