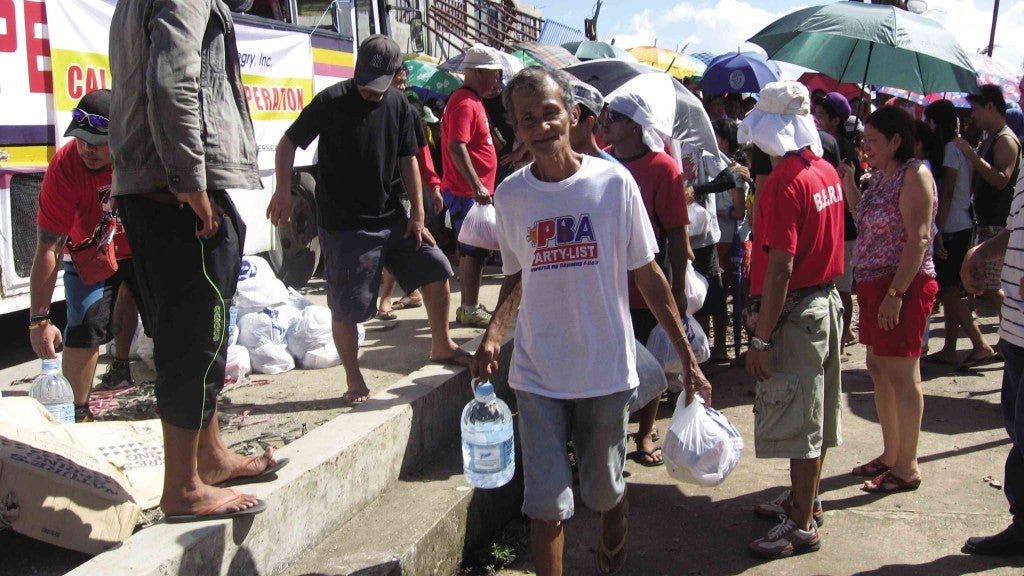 BENEFICIARIES of relief operations of the Commission on Filipinos Overseas through its Lingkod sa Kapwa Pilipino program in Pastrana, Leyte province

For several days in November 2013, the world watched in horror how Mother Nature unleashed its fury over the hapless areas of the Visayas, the middle sets of islands in the Philippines.

While Supertyphoon “Yolanda” (known internationally as Haiyan), left death, sickness and despair, it brought out a silver lining. As soon as the storm subsided, there was an outpouring of love and support from all over the world.

Filipinos overseas, as individuals or groups, were among those who quickly raised funds to be sent to the afflicted areas.

One of those who mobilized to help is the long-standing program of the Commission on Filipinos Overseas (CFO), the Lingkod sa Kapwa Pilipino (L1NKAPIL or Link for Philippine Development) program. L1NKAPIL called out to many Filipino individuals and organizations overseas on behalf of the victims and survivors.

The Filipino diaspora did not limit themselves to the traditional channels such as the Department of Social Welfare and Development or the Philippine National Red Cross. Philippine embassies and consulates all over the world received donations from Filipino communities within their jurisdiction.

An informal survey conducted by the CFO revealed that almost $44 million cash and in-kind donations were mobilized by overseas Filipinos and brought into the Philippines.

One of the CFO’s partners, the Negrense Volunteers for Change Foundation received P44 million (approximately $1 million) overseas assistance. Although based in Negros, they extended assistance to typhoon-ravaged Northern Iloilo and other parts of Panay Island to make and give wooden and fiberglass boats to fisherfolks.

To date, the foundation has given more than 4,000 fishing boats in the Visayas.

Below are the behind-the-scene stories of those who helped:

Feed the Hungry Inc., a Washington-based organization established by Filipino employees of the World Bank and International Monetary Fund, was one of the first to send funds for the speedy formation of a team to distribute relief packs.

Some 1,000 families were reached in Palo and Pastrana, Leyte, areas which were not immediately provided aid in the initial scramble for relief.

Students, with their teachers and administrators, from different parts of the United Arab Emirates, Saudi Arabia, East Timor and Kuwait did their part, including passing around coin banks.

The CFO was informed by several Filipino-American medical groups that they came to the Philippines to bring medicines and essential supplies, and to conduct free medical missions.

The Department of Health (DOH) recorded a deployment of more than 1,000 foreign teams who participated in these medical missions, most of which were composed of Filipino health professionals.

Between the DOH and the CFO, an estimate of $7.2 million worth of medical help (including medicines, supplies and medical equipment) were given through these missions.

Some individuals and organizations made use of their ingenuity and innovativeness to be able to raise funds and send help as quickly as they could.

One example of this is Rogelio “Vonz” Santos, a Filipino-American entrepreneur. Since many infrastructure, such as roads and airports, were rendered useless, Santos along with some friends, chartered helicopters.

They were able to drop off basic necessities, such as food and water to the Visayan provinces, without having to land. He pioneered the design and use of Butterfly houses, foldable and transportable quarters, for typhoon survivors.

Several Filipino groups in the US organized an “After the Storm” benefit concert for typhoon victims at Kennedy Center. The US-Philippines Society in cooperation with the Philippine Embassy and the Philippine Humanitarian Coalition was able to raise $350,000.

ABS-CBN Foundation through its website, was able to assist 734,612 families or 3,676,060 individuals from the funds it raised. These were spent on relief supplies which were distributed through ABS-CBN’s Sagip Kapamilya.

The Bayanihan Council, an umbrella organization of about 50 Filipino associations in Abu Dhabi sent $2,790 to the Philippines.

A group of Filipino women, married to Korean nationals, solicited funds from family and friends and was able to deliver at least 100 fishing boats to selected beneficiaries in Antique and Iloilo.

A Laos-based Filipino community was able to raise more than $15,000, which were sent to overseas Filipinos whose families were affected in the Philippines.

In southern California, Filipino-Americans went on a five-kilometer fundraiser and held a prayer rally and benefit concert. They encouraged the various Chambers of Commerce to explore trade and investment in the Philippines after the typhoon.

A “Brunch for a Cause” was organized in Dubai in the United Arab Emirates on a Friday which was supposedly a dayoff for most Filipino expatriates.

Instead, they came together for the outreach activity held at the Philippine Consulate. At least 40 organizations represented by about 1,500 individuals participated in the event that aimed to raise funds through packed foods that cost 50 dirhams each.

They were able to collect boxes of food, medicines, blankets and other materials, which filled two 12-meter container vans.

A benefit dinner was held by the Oxford Philippines Society, a group of Filipinos at the University of Oxford. The night of music and three-course dinner raised funds despite the short preparation time.

In Australia, collections during a Mass were sent to the Philippine Red Cross in Manila.

The Philippine Community of New South Wales and the Filipino-Australian Movement for Empowerment presented funds to the Red Cross.

An assistant pastor in Los Angeles, California, who could not leave the US as he risks forfeiting his religious worker visa, doubled his efforts in organizing special offerings at the church and conducting weekly rummage sales.

This is the same for other Filipino workers. In Hong Kong, some domestic helpers sent their wages to their families and communities who were victims of the typhoon. Some personal plans were postponed to give way to the rebuilding of their families’ homes and livelihood.

Across the US, several organizations of Filipino students, and second and third generation Filipinos held donation drives, aware that they needed to do something for their and their parents’ homeland. They made use of the channel they know best—the Internet.

Documents submitted by nominees for the biennial Presidential Awards for Outstanding Overseas Filipino Individuals and Organizations Overseas indicate that more than $7.2 million worth of assistance from 35 nominees were distributed all over the Philippines. These were gathered from individual and community efforts abroad and channeled mostly through nongovernment and civic.

Noteworthy were the Philippine American Chamber of Commerce Texas (about $1 million), Elena Agala through the Rotary World Help of Canada ($25,511), Romeo Cayabyab of Australia ($1,016 million) and Ramon Villongco through the Catholic Medical Mission Board of New York ($1.5 million).

Other hometown associations in the US, Canada and other major destination countries, especially those with roots in Leyte, Samar, Cebu, Antique, Iloilo and Capiz, simultaneously organized relief efforts.

Even now, months after the devastation has subsided and many communities have gotten back on their feet, benefit concerts, fundraising efforts and other innovative campaigns continue as the road to recovery is tough and challenging.

While the Philippine government has put in place a rehabilitation and recovery plan, it is heartwarming to note that efforts of Filipinos overseas still continue.

Classrooms are still being built and repaired. Livelihoods of different sectors are slowly flourishing. Despite the death and destruction, families have become hopeful again

The slogan of the CFO has been “Diaspora to Development” or D2D or “Magbalikbayanihan: Ang Kaalaman at Kakayahan, Ibalik sa Bayan,” (Return to the Motherland your knowledge and your Expertise).

Overseas Filipinos are asked to come back and give back, not necessarily physically but virtually, not only through financial remittances but also through the so-called social remittances.

We are hopeful that, natural calamities or not, Filipinos overseas will always be there to support their Motherland, one way or the other.

In most cases, to reach out and give back.